Women In Burkinis On the Beach 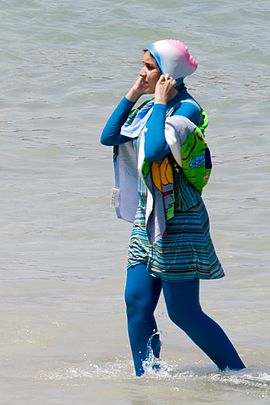 Browsing the internet, I discovered a story concerning identical twins. They were separated when one of them was lost in a market and never returned to her South Korean family.  Instead, an American couple adopted her and brought her to the United States.  Years later, when she was reunited with her sister, doctors discovered the girls had similar personalities, but the one who’d remained in Seoul tested 16 points higher on her I. Q. test.

Experts supposed their environments made the difference. The Korean girl lived in a harmonious, loving home. The American girl suffered 3 concussions while in the care of rancorous parents whose marriage ended in divorce.

Because the story is anecdotal, there’s no science to support any conclusion, but the difference in intelligence between the two young women posed a question. We know climate influences behavior.  Could it be the same with exposure to violence?

A google search turned up little information, but it did reveal another set of facts. Studies in the United States and throughout the western world indicate the human species is getting dumber. Not everyone agrees.  Some argue the tests are dated which leads to errors. Nonetheless, the numbers reflect a steady decline since 1970 and have continued to fall with each generation. In the 1950s, the average I. Q. score was 91.64.  Today it is 89.20.  Projections for 2050 put the average at 86.32.

Violence has dogged humanity since the species crawled out of the mud, so a link between it and a decline in intelligence might seem negligible.  On the other hand, impending doom on a grand scale has never loomed as large as it does today.  Vladimir Putin, for example, raises the specter of nuclear war as casually as if he were threatening civilization with a catapult.  The prospect of a radiated earth raises our mutual anxieties. Even a goatherd in the Andes knows of the danger thanks to his smartphone.

As a survival mechanism, fear is good. When we turn it against each other, it presents a palpable threat. Variations in I. Q. can exacerbate fear because they lead people to see the world differently. In turn, that difference makes them vulnerable to dissimilar forms of prejudice.  While not ironclad, people at the higher end of the spectrum tend to need fewer boundaries to feel safe. As a result, they register contempt for people who are conservative or conventional.  Conversely, those with a lower I. Q. are uncomfortable with non-conventional folks. Simply put, people dislike those who are different from themselves.  A view they all hold in common, however, is a prejudice against the historically powerless.

They also share a prejudice against leaders who are too smart.   …groups with smarter leaders perform better in objective measures [but] some studies have hinted that followers might subjectively view leaders with stratospheric intellect as less effective. A principal reason may be the public’s inability to relate to them, or the solutions the leaders pose are too complex to follow.

Culture frames who we are to a large degree but intelligence plays its part. We can modify culture but how do we modify a characteristic baked into our brains? Is there a way to escape the intellectual barrier and find common ground?  Or is it easier to continue to war with one another in a primitive game of might makes right?

A working democracy could be the solution. In that setting, we are required to exercise tolerance toward one another.  We must be willing to listen, negotiate and exhibit a willingness to lose. As we fear what is foreign to us, the last effort takes courage. We need a reason to trust.

Fortunately, nature provides us with a reason. There are 8.7 million plant and animal species on this planet. The system thrives on variation. At the human level, we do well to embrace the example. Surely, there is room in this world for a Muslim woman in France to wear a burkini on the beach.