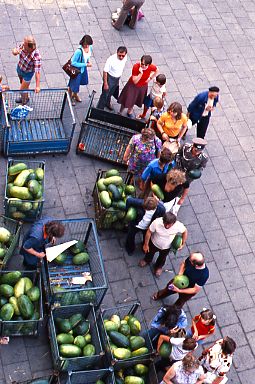 In my late 20’s, after returning to the west coast from Africa, I sought a temporary job before entering graduate school. The employment office sent me to apply for clerical work with a large advertising firm in Los Angeles.  I was excited. Advertising had always interested me. Fortunately, with my typing skill, I was hired. On my first day, I arrived early, full of anticipation. Little did I know the kind greetings I received from coworkers wasn’t a welcoming, but a show of sympathy. My boss, I would soon learn, was the evil twin of Snow White’s stepmother.  Barely had I arranged my purse in the bottom drawer of my desk when the light on my intercom blazed red.  “Noon sharp.  On my desk. A hamburger, coke, and fries.”

Seconds later, the door to my boss’s office cracked open.  A head appeared between the slit so that I found myself staring into the round face of a woman in her mid-forties. Her complexion was the color of library paste and her muddy brown hair cascaded across her forehead like tentacles.

I nodded in response, not so much in answer to her question but because her voice reminded me of a day when I’d shot a 357 mag at a firing range.  The gun belonged to a friend who encouraged me to try it.  He was playing a joke, I suppose, and I was sorry I fell for it.  After pulling the trigger, my hearing rang like a chapel bell for several minutes.

Satisfied I had understood her, the woman whose head appeared to be wedged between the wall and the door disappeared with a bang, as if she’d been a magician’s apparition. In the silence that followed, I observed the hound dog expressions of those around me.  Apparently, at one time or another, they’d all felt the lash of my boss’s tongue.

From that moment forward, I was vigilant about the time. When the hands of the clock read 11:30, I hurried from the office, the heels of my shoes tapping a snappish tattoo on the pavement. The restaurant I’d been instructed to find was 2 blocks away.  I began to feel confident. But when I reached the address, my heart sank to see a line of waiting customers outside.

It had taken me 4 minutes to reach my destination. If I trotted back, I’d need another 3 to reach the office in time.  That left me twenty-three minutes to place the order and wait for it. I wasn’t sure I could make it. Glaring at my watch, I scurried to the end of the queue, muttering like the Mad Hatter. “I can’t be late.  I can’t be late.”

“Tough boss?” A woman a few places ahead of me turned to give me a knowing look.

“She snacks on nails,” I replied.

When she heard me, the woman reached out a hand to tug at my shoulder. “Switch spots with me.  I’ve been there.”

Tears prickled my eyes as we exchanged places. I was too choked with gratitude to express myself properly. But I’ll always remember this woman whom I’d never seen before nor ever would again. She taught me a wonderful lesson.  Never underestimate the kindness of strangers.

Her sacrifice failed to save me, though.  By the time I returned to the office, I was several minutes late. My boss was parked like a traffic cop in front of my desk and once she spied me, her arms that had rested on her pillowed chest dropped to her sides. After that, she cursed a blue streak.

As I listened to her attempts to humiliate me, something remarkable happened. I found my voice. Though my hands were shaking, I retrieved my purse from the bottom drawer of my desk and muscled into her tirade. “I quit,” I said, loud enough for everyone in the room to hear.

Next, I marched toward the exit, imagining I could hear jaws dropping and a little applause, too.

As bosses go, that harpy from my youth was an exception. Not everyone feels insulted if they are kept waiting.  Andy Warhol professed to enjoy it.  “The idea of waiting for something makes it more exciting…” (“Queue Are You?” Town&Country, March 2021, pg. 47)

Nowadays people do a lot of waiting. Beset by power outages and disastrous weather, some have managed to prepare for it.  They arrive at a shelter with sleeping bags or blankets, ready to camp out for as many days as necessary. In 2020, many of us formed long serpentines to vote, despite the cold weather.  Lines are so common these days, I wouldn’t be surprised if a person queuing up for bottled water ended up with a Covid-19 vaccination, instead.

In my twilight years, I’ve grown impatient with waiting and have gained a greater sympathy for my former boss from hell. Warhol may have been a genius but I disagree with his notion there is pleasure in killing time. Like a chrysalis, waiting is a state of anticipation and nothing when compared to having wings.

On principle, I’m not an Amazon customer.  I don’t like their treatment of employees. But acquaintances who are less picky assure me the company’s one-day delivery service is magic.  If true, I might soften my opinion and watch with glee if, as done to other enterprises, they were to gobble up the Post Office, the VA, Social Security, and my state’s Department of Motor Vehicles.