The Bare Facts of Fashion 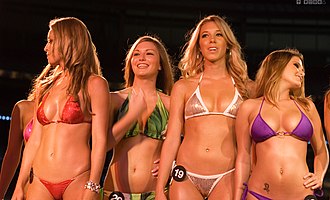 To talk about fashion while the Russian invasion of Ukraine rages may seem insensitive, but I have a reason for doing so. As a prognosticator of the future, fashion beats astrology.  For example, one persistent theory in the stock market says that when dress hemlines go up, the economy goes up with them. As an investor as well as a woman, I pay attention to these small details.  Watching the gowns celebrities wore at the 2022 Academy Awards and the Emmys makes me wonder if I should sell my stock.  The frocks were long and voluminous.

Both the length and puffiness of these creations are a reaction to working at home in sweatpants during the pandemic says one writer. (“The Confidence of Scale,” by Christine Brinkley, Town&Country, April 2022, pp. 54-55)  A top designer agrees. “I just feel like I should be doing the most extreme thing I can.” (Ibid., pg. 54.)  Another admits his goal is to incorporate as much yardage in a gown as possible. Fashion writer Christine Brinkley points out that this reaction to austerity isn’t new. In 1947, after World War II, women turned in their Rosie the Riveter coveralls for Dior’s voluminous “New Look.”

Scoff at the idea that fashion shapes the economy, but  Brinkley offers history as proof.  “…Marie Antoinette and the let-them-eat- cake epoch …required that carriages be redesigned so they would fit ladies’ lavish skirts and hairdos.)” (Ibid, pg. 55.) She fails to make the stronger argument, however. Marie’s thirst for cotton ignited the slave trade.

Another barometer of the economy is how the super-rich spend their money. During the pandemic, their incomes skyrocketed by 70%, but where could they go in a lock-down? Understandably, as restrictions lift, they show their hankering for billion-dollar yachts.  (“The Mildewed Age,” by Rachel Dodes, Vanity Fair, April 2022, pg. 32.)  Jeff Bezos’s newest vessel is so large that when he sails into Rotterdam this summer a historic bridge will have to be dismantled.  (Ibid, pg 32.)

The bridge won’t be the only casualty.  The environment will take a hit.  Large yachts like his emit  “… roughly the same amount of carbon the average American produces in an entire year.”  Bezos has assuaged his guilt with a 1 billion dollar donation dedicated to clean air and seas.   Whether he contradicts his values or is buying a “get out of jail card,” readers can decide.

These same multi-billionaires own mansions large enough to leave impressive large carbon footprints as well.  (Ibid. pg. 33.) That fact alone makes me wonder if their efforts to affect climate change are sincere. If so, why are they building apocalypse bunkers in New Zealand?

With the world still dependent on oil and gas for energy, their pessimistic purchases are a bet against humanity.  They may be right.  If scientists are correct, we have less than ten years to solve our environmental problems.  If so, the joke is on Bezos and the rest. Those elaborate bunkers may become elaborate graves. Little wonder that I keep my eye on fashion.  If designers focus on bikinis next season, I’m heading for a bunker, not because I expect to be saved but because I’d like one last glass of champagne.