Wisdom From A Shopping Cart 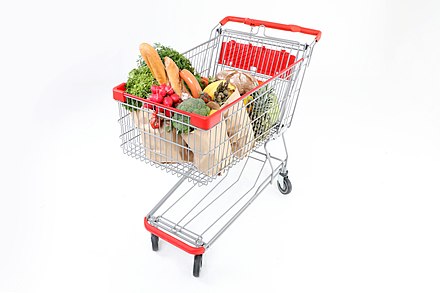 The young woman was standing on the curb a short distance from the grocery store, her shopping cart overflowing with purchases. She was muttering to the air in angry tones, so I intended to skirt around her, presuming she was one of the mentally ill who inhabits our streets. Something in her tone, a note of helplessness, forced me to pause and look back.

The woman was young, in her late twenties, I’d guess, with a pretty face and lustrous brown hair that fell like a horsetail down the length of her back.  From her attire, she appeared to be middle class. She was casually dressed in a jacket paired with jeans, but nothing in their condition suggested she’d ever slept a night on the street. Still, something was wrong.

“Can I help?” I regretted my words the moment they sprang from my tongue  I had no desire to get involved, but my encounter with the man in the fedora had continued to haunt me.

Raising her eyes to meet mine, the stranger looked surprised, as if I’d had the effrontery to interrupt a private conversation. Then, seeing I was old enough to be her grandmother, the crease between her eyebrows softened. Words poured from her as if we’d been acquainted for years. She told me she lived close by, but had spent all her money on food and now had no way to get home.

Her situation became clear. With neither a car nor money, she had intended to “borrow” the shopping cart and wheel it to her nearby home. She’d forgotten or did not know that  “borrowing” a cart was no longer possible. Most of them are equipped with electronic devices that immobilize the wheels once they leave the parking lot. She was stranded with too many packages to carry.

Her plan was ethically flawed, I knew, but my heart went out to her.  Opening my wallet, I held out the single bill it contained.  “Would $5.00 be enough for a cab home?”

As I walked away, she was still thanking me.  My one hope was that I had appeased the man in the fedora.

A recent AARP Bulletin (March 2021, pg. 15) reports that people are losing faith in one another. How times have changed. In a 1997 survey, 64% of us registered faith in the government and each other. Today, that percentile stands at 13%.  Joe Biden has his hand full if he wants to unite the nation.

The pandemic has been a dividing force among us, not only because experts have disagreed on how to cope with it, but because the disease has forced us to live in technological silos. As Isolation is the best defense against the spread of the illness,  many of us work at home, bank at home, have groceries delivered, telecommute with our doctors, stream our entertainment, and cluster on social media platforms or Zoom to chat with friends and family. Largely, we live in a virtual world rather than the real one.

Some tasks remain hands-on, of course. As yet, no one has discovered how to fix a broken waterpipe remotely, repair a  roof or get a  haircut, but I wouldn’t bet against technology.   My guess is bots may run the world, one day.

Or, maybe not. Aristotle has proved wrong about many of his learned assumptions. But he was right in this: Man is a social animal. Technology may create virtual friends for us, avatars that are learned, or witty or funny, but they’ll never warm us with a hug. Like it or not, we need each other–even if it’s only to teach a young woman not to steal a shopping cart and to put her faith in people.