Sense In A Nonsensical World 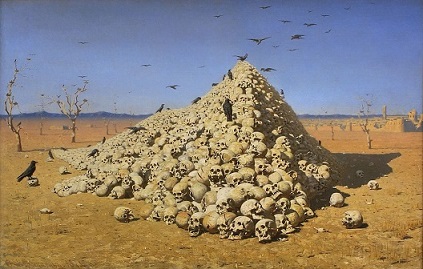 Someone on Facebook wrote to ask why I didn’t believe in God.  I replied belief is the wrong standard to apply to determine truth. If God exists, that existence should be provable. This blog isn’t an atheist’s rant, by the way.  I use the man’s question as an example to illustrate that the mind has more than one way to make sense of the world, but the difference between belief and knowledge is important to keep in mind.

Steven Pinker, a cognitive psychologist, gave a lecture recently about common errors in human thought. Causality is one I’ve discussed at length. People can confuse simultaneity with cause and effect. A man walks past a church on his way to work at 10 a.m. each morning.  A chapel bell rings as he passes. Is he the cause for its ringing?

Our brains are programmed to make connections.  If we care about the truth, the connections made must be verifiable. Otherwise, all we have is an opinion. Pinker thinks religion arises from dualism, treating the mind and the body as separate entities.  We may be comfortable that we understand the workings of the body, but the brain is an area of mystery which may be why many assign it a spiritual component.  From there, it’s a short hop to God (s) who expresses our desire for immortality. In addition, the religion that flows from God fulfills our human need for community. These are all reasons why religions exist but do religions prove God exists?

Upton Sinclair wrote, “It’s hard to get a man to understand something when his livelihood depends upon not understanding.”  Similarly, If a belief is satisfying, it’s difficult to abandon.

Most of us come to religion because our parents, our teachers, our role models encourage us to believe. Sometimes the difference between a belief and knowledge is unclear.  When I say “light travels at the rate of 186383 miles per second,” it may feel like a belief because I am repeating information without having direct knowledge. I accept what scientists tell me. The difference between faith and knowledge is verification.  Scientists around the globe have tested the measurement and agree on the number.

Most of us accept knowledge the same way we accept faith– from what we are told.  Few of us know how to measure light-years or track the movements of stars. Like religion, acquiring knowledge hinges on trust. That makes knowledge fallible because facts change, just like beliefs. We’ve all experienced that slippery slope during the pandemic.  As scientists learned more about Covid-19, they provided different information on how to deal with it. Some of us saw those changes as a reason to withdraw trust.

When we reject one piece of information, the mind tends to search for another.  To fight the Covid virus, people sought other remedies besides masks and vaccinations.  Some individuals came up with creative solutions, though ineffective ones.  Others fell back on conspiracy theories.  QAnon followers don’t accept much from experts. They believe the government, media, and financial worlds in the U. S. are controlled by a group of Satan-worshipping pedophiles who run a global child sex trafficking operation. In some parts of the country, that belief is as popular as religion.

Are these people crazy? No. They pay their mortgages, send their children to school, and pay their taxes.  By most measures, they are normal. They differ from the majority of us because they’ve fixed upon a belief that satisfies their discontent. Likewise, Russia’s Vladimir Putin chooses to invade Ukraine because he fears Western democracy and wants a buffer between it and his dictatorship. If he succeeds in his war, all he will have achieved, however, is a new boundary that will abut the NATO democracies Hungary, Slovakia, and Poland.

Is Putin insane?  Some people say yes. Others say no. Still, others suspect he is a sane man pretending to be insane to keep his opponents off-balance. We can never know what’s in his head, but we can explain his failed logic.

The two speeches he gave before the Ukraine invasion are riddled with fallacies. I list a few here as a clue to his state of mind. Fear dictates his judgment. …NATO, despite all our protests and concerns, continued to expand. The war machine is moving again and, I repeat is coming close to our borders.  In other words, he blames NATO for his decision to invade Ukraine.  He also blames his predecessors, Lenin and Stalin, and Khrushchev. They made border realignments to the land he claims to be  “historically ours.”

The folly of using history to justify borders escapes him.  By his logic, Britain should be a province of Italy as it once belonged to the Roman empire. Slavery, an accepted practice in all lands through the ages, could be revived based upon history.

That he justifies his war on Ukraine as lawful under Article I (2) of the United Nations Charter would be funny if the consequences weren’t so tragic. Article 12 affirms the peoples’ right to self-determination. In this case, “self-determination,” means Putin’s.

When he holds Ukraine accountable for the atrocities he is inflicting upon that country, he sounds like a man who beats his wife and blames her for his outburst.  … all responsibility for possible bloodshed will lay with the conscience of the ruling regime in Ukraine.

Putin’s preposterous arguments to justify his belief that Ukraine belongs to Russia is a lesson for all of us. We delude ourselves when we promote beliefs that run contrary to logic and fact. Insisting that others agree with our delusion makes us bullies, insurrectionists, or dictators.

Ask an American to identify democracy’s greatest gift and most will answer, “freedom.” To live one’s lawful life without fear of the government is a great prize, true. But free speech is another. It creates an arena where debate sifts through claims and exposes facts from fiction. People may defend their beliefs with passion, but some scientist, expert, or investigative reporter is likely to expose their errors. Errors, once exposed, diminish in importance and reduce the likelihood of violence. Not all who attempt to establish democracies understand this benefit. When they don’t, the endgame is tyranny.