On The Religion Of Unicorns 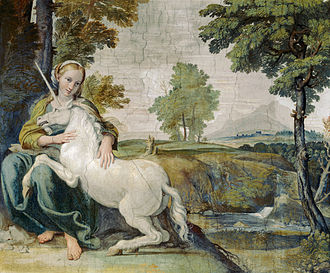 The article by Jaques Berlinerblau asked the question, ”Is there such a thing as a non-secular atheist?” I blinked.  Do atheists come in flavors now? He went on to explain non-secular atheists are those who “embraced science as an alternative to faith” I blinked again. How can there be an alternative to a belief in God? Yes, I can choose not to believe in God. But does that refusal make me a believer in science? The “either/or” of his question makes me uncomfortable as if I were wearing a scratchy sweater.

Language is supple. With it, we can make connections where none exist.  Take, “Twas brillig and the slithy toves did gyre and gimble in the wabe.” It sounds like a sentence. A subject and a  predicate seem to be present, but the words are gibberish. The comedian Sid Ceaser was brilliant at speaking made-up languages.  Politicians try but with less art.

Philosophers have some skills with language.  They can extrapolate, induce, deduce or speculate about angels dancing on the head of a pin and are taken seriously.  They may even employ rigorous logic which has little to do with reality.

When I hear someone argue atheism is a religion, for example, I shudder. Thomas Henry Huxley is responsible for the mistake. He took a simple statement, “I see no evidence that supports God’s existence,” and in 1869  invented a new word and a new branch of atheism. Agnosticism.  In his words, It simply means that a man shall not say he knows or believes that which he has no scientific grounds for professing to know or believe.

Didn’t I say that? The distinction between atheism and agnosticism is a distinction without a difference. Nonetheless, like a Christmas tree without ornaments, a new word invites embellishment. Libraries overflow with thinkers who struggle to explain the difference between the two.  For me, it’s all twallop. To say, “I don’t believe in God, or “I’m not sure that God exists because there’s no science to prove it,” is the same statement.  Both put me in the “non-believer” column.  As far as I know, there are no “half-believers,” though I regret having planted the idea for fear it will cause ink to flow.

Huxley muddied the water when he added “scientific” to his definition. Naturally, Berlinerblau couldn’t resist making a connection.  I repeat his question. “Can there be a non-secular atheist?”  Of course, there can.  I’m pretty sure Neanderthals had no concept of science much less an understanding of God because they’d yet invented one.

Atheism is a simple concept.  “A” means “without” and “theism” means “God.” Putting an “A” before other words works much the same.  One day, I might meet someone who claims to be an “Aunicorn.” That would be a person with no belief in the existence of unicorns despite almost as many centuries of literature about them as there are about God.   I admit I am a believer in science. But, that doesn’t make me religious.  It makes me pragmatic. Like Isaac Newton, “I can measure the motion of bodies, but I cannot measure human folly.”