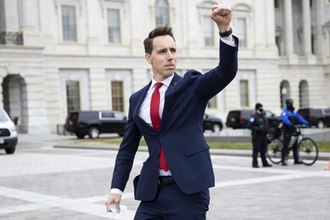 Most of us remember January 6, 2021, when Republican Senator Josh Hawley raised his fist to indicate support for insurrectionists gathered outside the Capital.  Many of his fellow Americans were shocked by his gesture, but not all.  Recently, Hawley felt enough wind at his back to try rabble-rousing again, this time with a Bible in his fist. In his words, Without the Bible, there is no modernity.  Without the Bible, there is no America.

“Hold on, buckaroo. Your facts are wrong, I wanted to say.  But The Editorial Board of The Kansas City Star had a better response.  They reminded Hawley that many of our founding fathers weren’t Christians but deists. They pointed out the many times Thomas Pain attacked the Bible.  Thomas Jefferson, they added, cut out parts of the New Testament to create a spiritual guide that eliminated superstition and nonsense.  In 1785, James Madison charged that Christianity had been on trial for “fifteen centuries.” In his Memorial and Remonstrance, he opposed a Virginia legislative proposal to establish a state religion.

Given our country’s history, The Editorial Board had no recourse but to regard Hawley’s remarks about ours as a Christian nation to be the “ramblings of an arrogant, partisan senator.”

Hawley may be arrogant. Nonetheless, there is a method in his ramblings.  Like the rest of The Republican party, he strives to divide our nation along religious, race, class, political, and economic lines. His endgame is to preserve a model of political and financial power that harkens back to slavery, an era where much of the nation’s wealth depended upon free labor.

In the short run, slavery was a benefit to a privileged class that was willing to blind itself to the misery the system caused. These short-term gains withered over time, however, leaving the nation morally bankrupt and with a wealth gap we have yet to solve. One consulting firm speculates that the aftermath of slavery in the coming decades will “cost the U. S. economy  $1 trillion to 1.5 trillion in lost consumption and investment. (“The Hierarchies of Weakness,” by Amitav Acharya, Foreign Affairs, July/August 2022, pg. 78.)

Those who see themselves as the beneficiaries of that former system appear willing to foment division to preserve it. That might be good for them but the majority of Americans would fare better if those divisions were healed.

As the matter stands,  1% of the world’s adult population controls 43% of global wealth while the remaining 54% controls 2% (Ibid pg. 77)  If wealth were shared equitably, allowing women and minorities to move out of poverty, the resulting entrepreneurship and consumerism would secure America’s financial power. It would also grow the world’s wealth by $28 trillion over the next five years. (Ibid, pg. 81.) In that economy, no one would go to bed hungry.

Contrary to the evidence, Republicans like Hawley advocate for a system that subjects large swaths of the population to discrimination.  The result is violence and disruption. (Ibid, pg. 80.)  No nation can long endure instability.

At the moment, we are a country at cross-purposes. How do we save ourselves?

We might begin by challenging old assumptions.  Are democracy and capitalism inextricably linked, for example? As it stands, capitalism seems to work against the democratic notion of equality. Consumerism, the cornerstone of capitalism, requires purchasing power.  Like a great Ponzi scheme, it appears to favor those who spend more.  It also requires perpetual growth. The concept defies nature. Even the universe, scientists speculate will end.

My blog on the fast fashion industry illustrated the harm of unbridled consumerism. As a society, we should examine its value.

Last year Forbes published an article that listed the 4 best uses of money: 1) purchasing experiences rather than things; 2) concentrating on small pleasures. Data shows small pleasures provide greater satisfaction than big-ticket items; 3) spending money to buy time to enjoy small pleasures; 4) engaging in charitable giving.  Studies show that being generous to others is one of the top six predictors of satisfaction.

If governments pursued Forbes’ brand of consumerism, we would live in a different world.

Capitalism may not be at odds with democracy. Our standards could be the problem. If so, what needs to be changed?

Ever curious, scientists have studied the values of peaceful nations.  Those with the greatest internal harmony promote public spaces and events that bring people together. Civic leaders rather than military figures are memorialized in statues. The media offers news without hyperventilating to gain attention.

More statues to honor women and minorities, more green spaces, and a press that doesn’t monetize violence seem doable. Or, we could return to basics. We are a government of all people, by all the people, and for all the people.  When we honor equality, we will be the masters of this system we call democracy