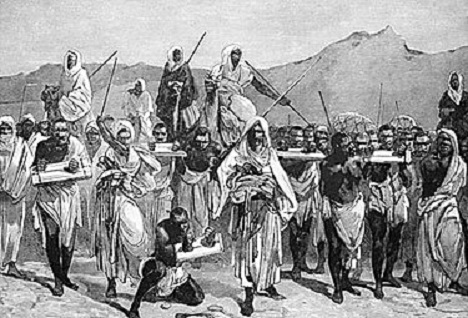 If past practices are a justification for anything, then slavery should be legal. Slavery existed long before the birth of Christ, and several passages in the Bible sanction the institution. Many of us may think slavery is illegal in the modern world.  But, those of us who do are wrong.  Nearly half of existing countries have no laws against slavery and do not punish those who engage in it.  Over 10,000 slaves are estimated to be entrapped in England, alone.  In the United States, the non-profit organization Exodus Road estimates 400,000 slaves suffer in plain sight.

Slavery’s victims are impoverished people lured to foreign destinations with the promise of work. When they arrive in their new country, few of them speak the prevailing language and know nothing of its customs, or laws. Denied their passports from the outset, they are a the mercy of unscrupulous traffickers who beat and bully them until they agree to work in the sex trade or as factory or domestic servants.

Poverty makes slaves of natural-born citizens as well. The growing gap between rich and poor has become wide enough to swallow middle-class professionals who work in high-income and resort areas. Surrounded by conspicuous consumption, teachers, policemen, and firefighters struggle to find affordable housing.  Most of them don’t. They live in their cars, RVs, or tents. Some work two jobs while the rich buy two houses. Though they aren’t subjected to physical abuse, these employees endure the indifference of those whom they serve.

Veterans suffer a similar fate. Recently, their health care benefits became political fodder in a power game between Democrats and Republicans. Comedian Jon Stewart charged these so-called leaders with callousness,  people who see veterans not as human beings but as the lowest hanging fruit in their political games

Women have a long history of living as chattel. For centuries, coverture deprived them of their property and their freedom.  Patriarchy, according to Catholic and Evangelical doctrine, confers upon men a God-given right to dominate women.  In the United States that legal yoke remained in place until early in the twentieth century.

Supreme Court Justice Samuel Alito appears to prefer the old ways. Raised as a Catholic, he is comfortable with his decision to overturn Roe v Wade, a 50-year-old precedent that said the right to an abortion was protected by the 14th Amendment of the U. S. Constitution. He denied that interpretation, saying his predecessors misconstrued the language.

His subsequent remarks on the subject suggest his religious belief shaped his conclusion.  In public appearances, he’s called for  “positive law,” one that defends religious freedom in an “increasingly secular society.”  His goal, he admits, is one of conversion: to convince those who do not identify with a faith, or view it as a negative, that religious freedom is worth protecting.

Solicitous of his religious freedom, Alito is willing to trod on a woman’s freedom to seek medical care.  U. S. Attorney General Merrick Garland views that position as overreach.  To prove it, he has taken Idaho to court, challenging its draconian anti-abortion legislation.  It violates the provisions of EMTALA, a federal law that governs medical emergencies, he argues.

The success of that suit notwithstanding, Alito’s religious freedom argument is spurious.  Catholics and Evangelicals might be satisfied with legislation that says personhood begins at the moment of conception, but what about other faiths? Rabbi Danya Ruttenberg says her religious duty lies in preserving the life of the mother. A conflict like this one has drawn Jewish, Buddhist, and Unitarian leaders together.  According to them, abortion bans violate their religious freedoms.   Atheists object, as well. They see no reason to be bound by any religious tenet.

On another level, abortion bans hurt the economy. The summer edition of Ms magazine notes that pulling women out of the workforce during their productive years slows the GDP and throws scores of these workers into poverty.  (“Bad Business,” Linda Burstyn, Ms, Summer edition, pg. 21.). Already, states that ban abortion are experiencing a brain drain. Young, educated women are voting with their feet, moving to escape discriminatory laws. Others are refusing employment where those laws exist. (Ibid, pg. 21.) Likewise, universities and colleges affected by the ban are bracing for enrollment declines. (Ibid, pg. 23.)

Turning back the clock on women’s rights won’t be easy. Females are half the population and, as we saw in Kansas, they vote.  What’s more, Alito’s veiled attempt to give political credence to the narrow view of one religious sect doesn’t widen religious freedom. It narrows it. As a member of the highest court in the land, the judge would serve his country better if he focused his attention less on Christianity and more on the delivery of liberty and justice for all.