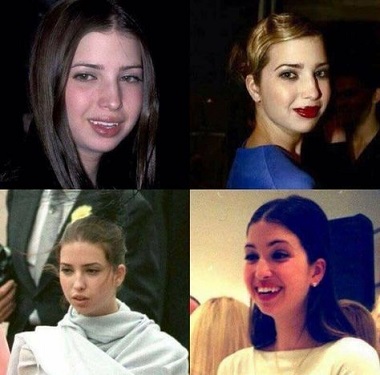 Recently, I opened my Facebook page to find a picture one gentleman had posted of  Ivanka Trump. It showed her as a teenager, her hair a dark brown, and her nose longer than seen in recent photographs. He was suggesting her current face wasn’t her natural one. The jibe saddened me. Mocking a woman’s appearance is a low blow, in my opinion, particularly if the insult comes from a man.

Curious about the photo, I googled others of Ivanka Trump as a teenager. The few I found showed little difference between her appearance then and now. If she’d had surgical refinements, they were minimal. Perhaps the Facebook image had been photoshopped. As for her hair, well… We all know few natural blondes exist outside Sweden.

In an earlier blog, I complained that a woman’s appearance shouldn’t be important. Unfortunately, men set the standards, and women take pains, literally, to meet them, resorting to treatments that may involve breast implants, butt implants, tummy tucks, and plastic surgery. The latter comes near to medieval torture in that it “involves separating the skin on the lower jaw from the muscle layer and hoisting it upward, thereby addressing the laxity of the jaw and neckline…” (Face Lift, Take Me Away, by Fiorella Valdesolo, Town&Country, May 2020, pgs. 78-79.)

Women are called the fair sex because appearing to be fair is required of them. Mocking their efforts, therefore, strikes me as decidedly unfair.  Nor do I accuse those who strive for perfection as being vain. Brave, more like, considering what some of them go through.

Fashion changes with the time, of course, so I take comfort in seeing cosmetic standards now being applied to men. Technology is the reason. Men see their images scattered across the web, on dating services, social media, YouTube, and now Zoom. In the past, portraits of those limpid jowls may have connoted experience and prowess. Today they suggest someone lacking virility. As a result, men are being pressured into taking the same extreme measures women have endured throughout the ages. One plastic surgeon candidly noted the number of men he sees in his clinic of late has jumped from 2% to 20%.  (Ibid, pg. 79.)

That males have succumbed to sacrificing themselves on the bonfire of the vanities strikes me as enormously fair. Yet an injustice remains. In the case of facelifts, they suffer less than women.  Their skins are thicker, so they experience fewer bruises. I don’t know what to do about this inequity. Perhaps I’ll send Gloria Steinem an email.