Why Do Writers Write?

by Caroline Miller
on silence, the forms of silence, Tillie Olsen, writers who start late in their careers
0 Comment

I came across an essay about writers and silence the other day, written by Tillie Olsen in 1965 and reprinted in Harper’s Magazine in May of this year. (“Ways of Being Silent,” by Tillie Olsen, Harper’s Magazine, May 2015, pg. 25)  The theme is one I’ve considered of late (Blogs 4/3/15, 5/7/15), so I paused to discover  what the author had to say.   For her,  silence was the unwritten manuscript.  She recollects how Herman Melville took years to write Moby Dick because the story was demanding and he was obliged to earn a living, working in a Customs House.   Similar  obligations  delayed the careers of writers like George Eliot, Joseph Conrad, and Isak Dinesen, all who began their novels in their forties.   Laura Wilder and Maria  Dermoût  took up their pens in their sixties.

As Tillie Olsen was an author unknown to me, I did a Wikipedia search.  She, too, began writing late in life.  She started her first novel, Yonnondio: From the Thirties, in the 1930s at 19 but set it aside until it  was published in 1974.  In the intervening years, she raised her children and attended to household duties.   Social causes took up some of her time.  She was an early and  ardent feminist as well as a  union activist, her husband being an organizer for the longshoremen.

In some ways, her career was similar to mine.  I am a feminist, was a union activist and took up the pen late in life.  Yet not until I saw the reprint of her essay did I know she existed.

My sudden awareness of her brought other forms of silence to mind.  For a writer, failure is the greatest. Sometimes a lack of inspiration is the cause.   More often, however, the silence comes from the locked doors of the publishing house.  Or if published, a book can collect dust on a shelf and never be read.  The list of failures is long but it always ends as a  forgotten memory.

Despite these obstacles, we writers insist upon picking up our pens.  What is the message we feel obliged to shout into the void of a  deaf, dumb, blind universe?  What miracles do we suppose our stories might achieve?

I have no answer to my question.  I only know we are like the grass.  Mow us down, burry us in silence… we continue to  reach  for the sun. 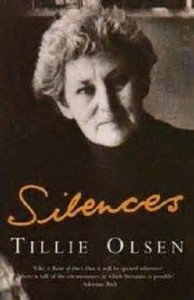