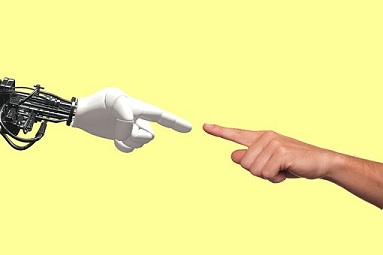 A reader directed me to an article in the October issue of The Atlantic, John Seabrook’s comments on Artificial Intelligence (AI) and creative writing. Could machines learn to write better than professionals, it asked. I’ll probably go on foraging for ideas from this piece for a while, the way people pick at Thanksgiving leftovers. The subject is meaty, to say the least.

One question the intrigues me is whether AI could work with puns? Would it get the double entendre of “meaty” in the sentence above, for example? I’m guessing, over time, it would.  What is writing, after all, but practice, practice, practice? Composition is less about art than discipline.

When researchers compared the brain scans of amateur writers to those with careers, they discovered beginners and professionals used their brains differently. “In amateur writers, neurons fired in the lateral occipital areas, which are associated with visual processing.” With professionals, the brain lights up in the midbrain. (Ibid, pg. 56)  Proof enough that with writing practice, the brain will change.

Of course, even a seasoned writer could use an algorithm now and again. One company, Grammarly, sells computer programs they say they designed to “improve my writing.” True, my spelling has deteriorated abysmally, having taught English in both the United States and Britain where variations abound. Plow and plough, for example.

True, syntax also varies, as does punctuation. In addition, the Modern Language Association, (MLA)—keepers of the English cannon—periodically publishes new rules of linguistic etiquette. Grammarly has a program for that too. Unfortunately, I sometimes find rules too rigid and prudish to encourage invention, and so I ignore them. Not wantonly, mind you, but with an eye to sometimes surprising my reader–like an ecclesiastic who begins a prayer with “Shit.”

Because language is fluid and shaped by its environment, I doubt my writer’s craft is likely to be overtaken by a machine.  Change is too constant. In any case, the mechanics of spelling, punctuation, and grammar in no way account for the mystical aspect of creativity.

Until an algorithm shows me the face of God, I live as a writer without worry.