The Questionable Likeability Of The Pant Suit 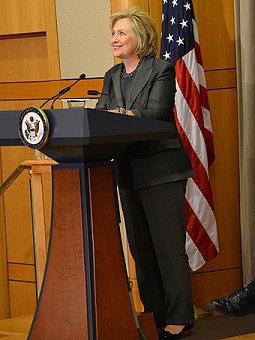 Here’s another patriarchal hangover that is affecting the 2020 election. According to several studies, likeability is optional to voters if the candidate is male, but is a requirement for a female. Also true is that people view forceful women as lecturing but give a thumbs up to a man with the same trait, leaving a woman in public life facing a dilemma. If she’s forceful, will be people resent her?  If she isn’t, will they presume she can’t lead?

The question is slowly being resolved in state legislatures where the number of elected women is rising.  Of course, Hillary Clinton won the majority vote in the 2016 Presidential election, but she failed to break the glass ceiling in the Electoral College. So the question remains, can a woman ever be President of the United States?

In patriarchal societies, a double standard has always existed for women and for men. Sometimes, it works in reverse, as long as the woman loses. Take Mexico, for example. There, the murder rate for women is skyrocketing, but rather than address the issue, the Attorney-General proposes a different solution. Stop recording femicide deaths and classify all of them as murder. Treating a woman like a man, in this case, makes the problem disappear. (“Slaughter of Women Goes Ignored,” by Carmen Brenas, The Week, Feb/ 29. 2020 pg. 15.)

As the Mexico example illustrates, prejudice against women takes many forms. For example, when challenged, Elizabeth Warren proved her Native American heritage with a DNA test. Was she rewarded for her transparency? No. The question then became one of percentile. Did she have enough ancestry to brag about?

Donald Trump, on the other hand, continues to withhold from the public information about his taxes and his medical records. His decision is unprecedented among American Presidents. Still, in the absence of a public outcry, his conduct gives shade to Bernie Sanders. After the Senator’s recent heart attack, he, too, refused to release his full medical reports.

Would Elizabeth Warren have been given the same pass, I wonder?  Probably not.  As Hillary Clinton’s presidential campaign showed, a woman candidate gets criticized not only for her likeability but also for how she dresses.