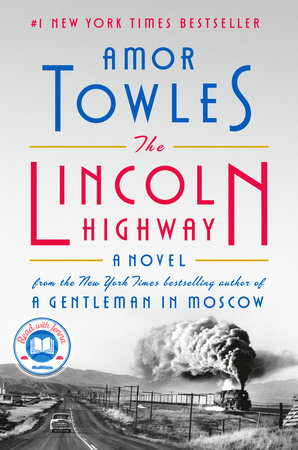 A discussion of The Lincoln Highway, a novel by Amor Towles, will air this fall on Just Read It. It’s part of the 10th anniversary of the book talk show.  Two local writers will be with me to celebrate and review the novel. Earlier, they joined me for a discussion of Towles’, A Gentlemen in Moscow.  Their commentary was so lively that I invited them to review the author’s latest work. As I expected, the conversation was brisk, but we seemed to have read different books. My guests saw the plot as a joyful coming-of-age story. I was reminded of Theodore  Dreiser’s, An American Tragedy.

Readers can decide for themselves when the program airs this fall, but I’m going to get my licks in here.  As a courtesy to those who have yet to read this 600-page tome, I offer a fair warning.  What follows contains several spoilers.

As my Just Read It guests surmised, The Lincoln Highway is both a coming-of-age and a road trip story. Three of the central characters are  eighteen-year-old boys, Emmett, Duchess, and Woolly, who meet as inmates at a youth detention center. As the book opens, Emmett, charged with manslaughter, receives an early release because his father has died and Billy, his 8-year-old brother needs someone to look after him. The family house has been sold to pay off debts, but Emmett manages to salvage his dad’s old Studebaker so that he and Billy can leave town.  He wants to escape the place where his scuffle with a bully ended in the culprit’s death.

Billy is eager to hit the road and packs his only treasure, an Alphabet book that contains stories of fictional heroes, most notably, Ulysses. He implores Emmet to head for California, following the trail of old postcards their mother sent after she abandoned them. Emmet humors Billy because he thinks San Francisco would be a good place to start a new life.

Neither boy knows that Duchess, a kid from the mean streets, and Woolly, the gentle but drug-addicted offspring of a wealthy New York family, have escaped the detention century by hiding in the back of the truck that brought Emmett home. When the pair learn about the Studebaker, they make plans of their own. The odyssey begins when Emmett and Billy, having little money, hop a freight train to go after the two thieves who are headed for New York.

Like any road story worth its salt, the youths face challenges and meet a variety of eccentrics along the way.  A book of its size also contains many themes. Sarah, Woolly’s sister, reveals one of the most important when she talks with Emmett at her family’s lake house where the boys are reunited.  She tells him, If you take a trait that by all appearances is a merit—a trait that is praised by pastors and poets, a trait that we have come to admire in our friends and hope to foster in our children—and you give it to some poor soul in abundance, it will almost certainly prove an obstacle to their happiness.

Merit is what each teenager strives for in this story. Duchess, set up by his father for a crime he didn’t commit and then abandoned by him, values loyalty. He tells his pals he can be trusted, “in his own crazy way.” Never mind that he attempts to shoot Emmett before he realizes his gun has no bullets.  Emmett believes in taking responsibility for his actions. When his victim’s brother catches up with him, he endures a beating without raising a hand to defend himself. Woolly prizes friendship. A drug addict who never adjusted to the elite society into which he was born, he commits suicide but not before enriching  Emmett and Duchess with enough money to alter their lives.

The merit that guides each boy is different but each leads to a bad end.  The conscience it bestows is too weak to withstand the roadblocks that stand in the way. Like Clyde Griffith, the central character in An American Tragedy who knew his religion, it wasn’t enough to keep him from committing murder when it clashed with his ambition.

Towles’ book ends on what seems to be a happy note. Emmett and Billy reclaim the stolen Studebaker and with Wooly’s gift of money, they head west to California on the Lincoln Highway. All’s well that ends well. But Towles isn’t done with his readers. He leaves them with information about which Emmett and Billy know nothing though it will impact their lives.

Duchess lies dead at the bottom of a lake–the result of a trick Emmett devised to prevent Duchess from interfering with his escape. As the wind blows through Emmett’s open window, he imagines he is free to live his life and take care of his little brother. In reality, the story ends where it began, with Emmett having accidentally killed a second person. Readers don’t need a crystal ball to envision the tragedy to follow.