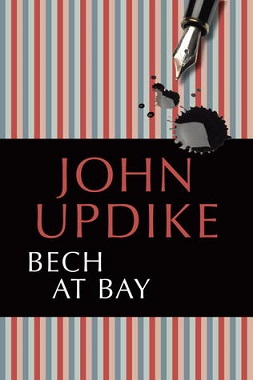 The day before the coronavirus prompted the library to close at my retirement center, like everyone else, I rushed to the stacks to gather as much reading material as I could carry. My neighbors, being more nimble than I, had left the shelves almost bare by the time I arrived. All that remained in the fiction section was a battered paperback, Bech At Bay by John Updike. Disgruntled, I checked it out, hoping it might prove more tolerable than Rachel Maddow reports on death numbers in retirement centers.

I say disgruntled because in 2019 I wrote a blog in which I admitted I’d never read a book by John Updike and didn’t intend to because he was one of “the boys,” men like Hemingway, Roth, Malamud, and Mailer, who in their literature reduce women to sex objects, focusing with salacious detail upon the hairy triangle of a woman’s pubic area and finding themselves so angered by their dependence upon sexual gratification that they take their revenge upon the objects of their desire, crafting midget profiles of literary lovers, women who behave as though they were bits of wet clay, eager to mold themselves around the  granite tower of a phallus.

Cracking the book’s cover, I soon discovered I was right to anticipate Updike’s misogynistic malice. Each female in his plot was either a past lover, a present lover, or an object of desire. All wore loosely wrapped bathrobes that, with the belts loosened, allowed a yeasty smell to inundate the room.  I want to scream at the conflation of women with their vaginal scent but will remain at my computer long to describe the plotline which, I regret to say, offers no solace.

Bech, a writer in his 70s, contrives and then commits three revenge murders against literary critics who were dismissive of his talent. Next, he marries a girl 50 years his junior. She bears him his first child and a few months he wins the Nobel Prize.

Frankly, this ode to masculine hubris belongs in the fantasy section of the library, or I don’t know my birthdate.

True, Updike has won several prodigious literary awards, including a Pulitzer prize, while my small memoir languishes in some literary agent’s inbox. Even so, a cat may look at a king and know, without the need for clever words, that the writer who stands before it is no enviable giant of the arts but is one carried by the current of fashion until, over time, the stream plays out in the darkness of the overgrown literary forest. In my opinion, Sinclair’s writing will be forgotten and eventually leave the world, not with a “bang but a whisper.*

To those who bridle at my assessment and accuse me of failing to see Bech at Bay is satire–a piece where Updike, an aging writer like his hero, is poking fun at himself– I can only congratulate you on your charity.