The Gravediggers Of Bucha 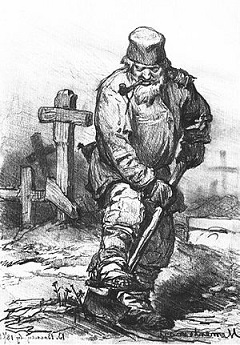 Three men meet daily to bury the dead in Bucha, Ukraine. No one pays them.  They perform their task in the name of humanity. They’ve been at their work for many months, even during a period of Russian occupation. Glad to be free of the gruesome task, the invaders tolerated the men’s presence.

Digging graves isn’t their regular job. One was a pizza chef before the war.  The second worked in construction.  The third is a retired football player.  Before the Russians arrived, their paths never crossed.  But the fires of war brought them together. Faced with the sight of charred bodies, they knew what they had to do, and so. they turned their hands to gravedigging.  Fortunately, it was a vocation that required no training, only a strong back, and a shovel.

The continuing horror around them has tempered their friendship. Today, they call themselves “brothers.” That bond is their reward–a lily rising from a dung heap.

I cite the story because it is an example of soft power. Soft power is the strength people cling to in their darkest hours. Its source is a set of shared values that give society cohesion and hope. Ukrainians share a desire to rid themselves of an invader.  That alone allows them to look beyond the present and toward the future.  In contrast, the Russian invaders use military coercion to obtain their objectives. Over time, solidarity usually wins over might.

Daniel W. Dezner, writing in Foreign Affairs, notes that a shared outlook affects a country’s prospects. (The Perils of Pessimism, by Daniel W. Dezner, Foreign Affairs, July/August 2022, pgs. 34-43.)   Citizens who look to the future with anticipation will forgo demands for immediate outcomes because they believe conditions will improve.  Two factors reflect that expectation: a robust birthrate and minimal migration. (Ibid, pg. 36.)

When the future looks dim, these same citizens will demand immediate rewards, making it difficult for leaders to consider long-range plans. A flexing of military might will substitute for genuine strength.  The extent to which greater powers are optimistic or pessimistic about the future has profound effects on their present-day strategies. (Ibid, pg. 38.)

Two factors reflect how a nation sees itself: its robust birthrate and minimal migration. (Ibid, pg. 36.)  So, where does the United States stand within the spectrum of hope and might?  The public already has spoken. A majority believe the country is headed in the wrong direction. (Ibid, pg. 41.)  Says Dezner, Donald Trump as the 45th President accelerated the nation’s anxiety. He spewed fear about our need to protect our borders from the ravages of other countries making our products, stealing our companies, and destroying our jobs. (Ibid, pg. 41.). Those isolationist views weakened ties with our allies abroad.

In contrast, says Dezner, Biden’s support for the Ukraine war was a game-changer. Rich in political experience, Biden relied on soft power to repair the damage his predecessor inflicted upon the nation’s reputation.  Quick to revitalize trust among our allies, he was able to upend Russia’s assumption that America’s foreign influence was weak and that a peremptory strike against Ukraine would succeed.  Denzer insists Biden’s choice of soft power has strength[ed] the liberal international order.

If we accept the author’s markers as a measure of the country’s condition, we appear to have a healthy core. Though Covid may have affected the numbers, U. S. immigration figures continue to be greater than the numbers for those who migrate –another form of population growth.   What’s more, the economy remains strong despite inflation. An added plus is that when Biden restored America’s hegemony, he strengthened democracies across the globe.

Voters who continue to feel the country is headed in the wrong direction should look again.  We have every reason to anticipate the future. Our cultural war is frightening, but our institutions have withstood the blows.  The Constitution survived an insurrection. We discovered that many people to the right and left politically share a common value.  They put loyalty to their country above personal ambition. This behavior helps restore our trust and reinforces our values.

The nation’s struggles are far from over, but its resilience justifies our dedication to its future.  Like the gravediggers of Bucha, we have reasons to keep our faith in our democracy and use the present to secure the future.