The Demise Of Advice And Consent? 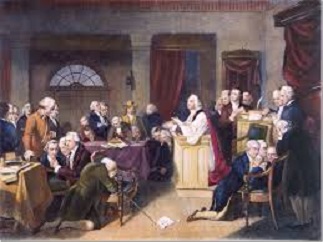 The Democrats in Congress are proposing several bills to curb presidential powers and to strengthen the system of checks and balances the Constitution provides. The changes offer increased protection for whistleblowers and agency watchdogs, prohibits a president from receiving payments from a foreign government, and limits presidential pardons. Whether the Senate will agree with these changes is another matter.

House Speaker Nancy Pelosi is right to address the potential for abuse in Presidential power, however. The 2016 election gave us a President who was not elected by the majority of voters, but who came to us through the Electoral College.  A television celebrity with little grasp of the political process, he has wrapped himself in the language of Article 2 in the U. S. Constitution and has wrongly concluded he has the “right to do whatever I want.”  When I first heard him make that claim, I laughed.

Unfortunately, the joke was on me. I had put too much faith in our Constitution. What I’d failed to recognize was the document’s strength existed, not because the words were written by our forefathers, but because generations of citizens have adhered to these words.

My first hint that there were cracks in our system came in the 2000 presidential election. After Florida’s hanging chad debacle, I should have awakened to defects that threaten our basic protections. Instead, I was content to permit the Supreme Count to “appoint” our president.  I should have remembered a court interprets the law. Its members are not representatives of the people. Yet I made no protest when 9 judges assumed the mantle of elected representatives and spoke for a majority of the electorate.

Today, we have a president, Donald, Trump who wasn’t appointed by judges or by a majority of voters, but by the third process I’ve already mentioned: the Electoral College. Five times in our history, this body has hijacked the will of the majority. The loophole exists as a contentious compromise agreed upon at the Constitutional Congress of 1787.  Perhaps it’s time to take the training wheels off our democracy and abolish the Electoral College.

Even so, none of its outcomes compare to the damage being done to our civil liberties by our current president who imagines the secret powers contained in the presidential emergency action documents  (PEAD) have given him what amounts to a crown and scepter. They do not.   Dwight Eisenhower created PEAD so he could act swiftly if the nation faced a  nuclear threat.

The powers Eisenhower gave himself are extensive and have grown over time. They allow a president to suspend Habeas corpus, detain U. S. citizens who are suspected as subversives and order warrantless search and seizures, to name a few. Scholars speculate that fifty or sixty of these authorities exist to date.  Some of these experts defend the president’s right to issue Executive Orders by arguing that right attends to be being both Commander in Chief and Chief Executive. Others disagree and point out the Constitution, “includes no comprehensive separate regime for emergencies. Those few powers it does contain for dealing with certain urgent threats it assigns to Congress, not the President.”   When Abraham Lincoln suspended Habeas corpus during the Civil War, he admitted he was on shaky ground.

Despite the debate, our current head of state exhibits no reservation about his presidential authority. His arrogance has brought the country to a new understanding that our inalienable rights are fragile. Because of him, we’ve discovered weaknesses in our Constitution that must be addressed.  What defines an emergency, for example? Also, we are forced to ask what authority, if any, does the Congress or the Supreme Court have to circumvent the excesses of a Commander in Chief who controls the military?

We thought we knew the answers to these questions. In four short years, Donald Trump has shown us we are wrong.