She Promised Us A Rose Garden 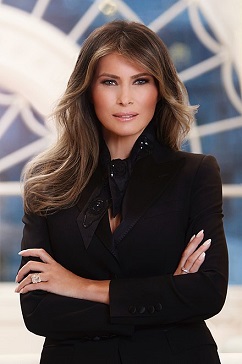 Some people love Danish modern furniture.  They swoon “o-o-o” and “ah-ah-ah” over its sleek lines and the absence of ornament.  “So uncluttered,” they remark.

I reply that a kid’s park slide is uncluttered, but I wouldn’t want it in my living room.   Give me couches and chairs round with chintz cushions that are fluffy as clouds. When I want to take a nap, I don’t want to rest on a slide.

Everyone has his or her aesthetic, of course. I have a friend who breaks into a rash each time I mention chintz with cabbage roses.

Roses were a big item on my Facebook page the other day. First Lady, Melania Trump renovated the White House rose garden and removed some cherry trees while she was at it. When news of the changes became public, a hue and cry rumbled across the land. One New York Times reporter questioned why a foreigner had been allowed to uproot our heritage.

Talk of chopping down cheery trees sent an alarm in my brain, as it probably did with others. Didn’t  George Washington get into trouble for doing that as a boy? Has the country learned nothing?

I turned to the newspaper article in question.  Sure enough, the cherry trees were gone. What remains is an unimpeded view of a line of Ionic columns, beautiful in their own right and good enough as a view for the Acropolis, birthplace of democracy.

The new garden is too spare for my floribunda tastes. Even so, its pure white and green simplicity, together with its sweep of unbroken lines, gives the setting greater formality than before.  It’s not a place where I can imagine a dog running free, despite the expanse of grass.

Though different from the earlier design, I see no desecration, not enough, to raise questions about the First Lady’s Slovenian origins.  A more formal garden, one could argue, is in accord with our nation’s proud history.

So why are people outraged? Are they annoyed that someone with the name Trump accomplished it? Or do they imagine changes were made without respect for tradition? If so, they are mistaken. Melania’s garden is an adaptation of a 1963 blueprint approved by a previous First Lady, Jacqueline Kennedy. When I think of her, I  recall a woman who knew all about simplicity and elegance.