What We All Need Is A Good Broom 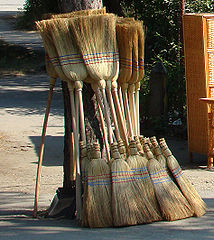 Call me a masochist, but every morning I open my computer to trawl for news.  Reliably, the headlines capture the worst of times: Joe Biden’s campaign files have been hacked; rattlesnakes bite two Yosemite hikers; west coast fires make the air unbreathable… One columnist expresses concern that the public isn’t alarmed enough about the events of 2020.  In short, the internet has become the Times Square of misery.

People are resilient, of course.  If our President had shared the awful truth about Covid-19, the public could have prepared for it.  Some would have insisted the news was a hoax. That’s their choice. But I’m guessing they’d have second thoughts if they saw themselves being attached to a ventilator.

My friends on Facebook do little to reduce my anxiety.  Yes, I can find distraction in a recipe for krumkake. Most folks, however, share information destined to set my hair on fire. A few minutes spent with them and I look longingly at my unmade bed.  But can I sleep when I feel like a person about to take my first parachute jump?

To be honest, I could do more with my nervous energy than fret.  I could stand on a street corner with a sign that asks people to honk if they plan to vote for Kanye West in 2020. Or, I might attend a  Donald Trump rally wearing a mask and watch myself being tossed into the street on the 6 o’clock news. My complaint is that nothing I’ve done so far—signing petitions, contributing to campaigns, or writing to Nancy Pelosi seems to have saved the country of 328.8 million people  (plus or minus 200,000 lost to the pandemic) from the Armageddon promised by political pundits of every stripe.

Is anyone surprised that I have moments of doubt? Yet for some reason, even in my darkest hour, my mind drifts back to 1964 and the Japanese film, Woman in the Dunes. It’s the story of a widow who sweeps sand from her doorstep each day to keep her village from being buried by it. Hers is a small, personal responsibility, but it has an enormous consequence. For me, the story teaches hope. I, too, can take personal responsibility and perhaps influence the upcoming election. If I study the issues, make certain of my facts aren’t fake, and vote early, then like the woman in the dunes, my small gesture can matter. What if every voter did the same? Imagine a democracy where everyone carried a good broom.