Valley Of The Dolls

by Caroline Miller
bond between child and grandparents, Nagoro, village of dolls
0 Comment 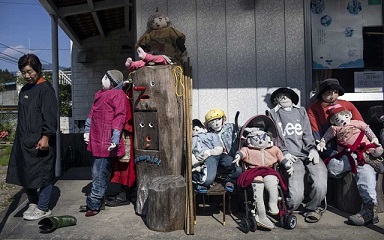 During the seasonal exchange of greeting cards, one friend replied to my holiday message as follows: “Among our grandchildren disenchantment is not an option.”

Most grandparents would nod knowingly at that statement.  I have no grandchildren myself, but I have witnessed the unbreakable bond forged between young and old when a gap of between 30 or 50 years exists. What children and their grandparents seem to share is a sense of play–a period of wonder that emerges before and after parental duties make adults serious.

Hard to imagine, but there is a hamlet in Japan, Nagoro, where no children exist. With less than 100 residents, a majority of them elderly, it was, for a time, a place where no laughter emerged from the windows of the nearby school and the playground swings hung empty, little more than relics of the past.

The children had all disappeared–not lured by the magic of a pied piper. They’ve been dragged from their ancestral village by parents who needed to find work in the cities. Eventually, the exodus hollowed out the community and when the wind blew through the valleys of Nagoro, it seemed as if the surrounding hills were in mourning.

With time, the absence of children became unbearable, so one resident began to make life-size dolls.  Some of their faces were imagined, but some bore a strong resemblance to an absent grandchild. Over time, the woman created 300 children, so many they outnumbered the existing population. Their presence spilled out into the streets. One could find them seated on public benches or reclining against a shop wall, multiplying until they reached the school and reclaimed the empty swings. Little wonder that whispers spread about the village of dolls. People who came to see them were charmed and went away to tell others.

Nagoro became a local tourist attraction, as a result.  Children, if only for a day, tugged at their parent’s arms, intent upon seeing their likenesses stitched together from yarn and rags. Their delight often broke into laughter as if they meant to stir the surrounding hills again.

More people came to the valley, sometimes from countries all over the world. They brought their commerce with them, breathing new life into the village.

My friend, I suspect, could have predicted the happy ending. Where children exist, disenchantment is no option and a little magic is possible.