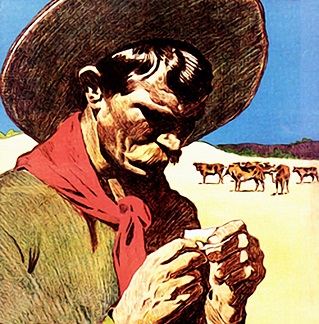 In the summer of 1947, I took a walking tour of Boulder Dam with my mother.  That’s when I met my first Texan, an encounter I never forgot.  Though it was hot, maybe 90 degrees, our guide for the afternoon paused above the dam’s large reservoir and asked us to look down.

“See all that water?” he asked, as if it were possible to ignore a roar that deafened us.   “That comes from Lake Mead, the largest body of water in the whole United States” Next, he tucked his thumbs inside his belt and squinted at the tall man among us who sported a pair of cowboy boots and a Stetson.  “Can’t find anything as big as that in Texas.”  The grin plastered across the guide’s face bore a challenge.

The fellow he’d addressed glanced at the people around him.  Everyone was peering up under the broad brim of his hat, awaiting his reaction.  The man didn’t disappoint.  Instead, he resettled his Stetson upon his head, giving himself time to comb his black hair with his fingers.

“Hell,” he spat, his voice loud enough for the people in Texas to hear.  “You call that big?  I got a pump in my cow barn that’ll drain that pool in 5 minutes.”

Everyone laughed, including the Texan.  John Wayne couldn’t have played a better hand.

For most of my life, Texas has been a dyed-in-the-wool red state, politically.  But maybe times are changing. Texas seems to be tinging toward blue, which may bode well for the Democrats in the next election.  Texas, after all, has a whopping 36 electoral votes, second only to California.

Already, there are signs of a change.  Three years ago, police in Tyler, Texas shut down a lemonade stand two girls ran, ages 7 and 8.  They were guilty of running a business without a permit.  It may have been the law but many rankled at what seemed to be mean spirited.  Today, that law has been amended and awaits final passage in the House, having passed the Texas Senate.  It allows youngsters to sell their non-alcoholic beverages without a permit. (“Texan Takes a Stand, The Week, April 5, 2019, pg. 33.)

Still clinging to their conservative mantle, the legislators explained it was important to encourage minors to be entrepreneurs.  Of course, this change of heart poses a new challenge for the state.  Can it drink enough lemonade to rival the waters of Lake Mead?