The Decline Of Bread And Circus 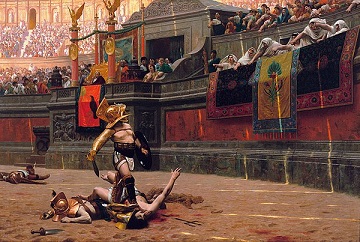 When Donald Trump leaves office, it will be difficult to envision how the media, cartoonists, and historians will cope.  He is one of the most colorful presidents the country has known.  Red is the hue that most comes to mind. He has executed more federal prisoners than any other of our leaders in modern times, breaking a moratorium after 17 years. Even as he faces the end of his term in office, he plans for more deaths and is busily reinstituting firing squads as a substitute for lethal injections.

If the public hungered for bread and circus after the bland Barrack Obama years, Trump rewarded them with a leadership style akin to Nero.  A cruel president, he is also a mesmerizing showman. Many have enriched themselves through his antics but no conduct is more spectacular than his handling of the Covid-19 pandemic– a time where he played with people’s lives as if they were match sticks in the hands of an adolescent pyromaniac.  Even so, his supporters will defend him and sob into the hemline of his trousers as he leaves office, their loyalty reminiscent of Japanese holdouts who continued to fight after their country’s surrender in World War 11.

The drama will continue for a time after Trump leaves the stage.  Bankruptcy may follow him or lawsuits that have been waiting in the wings. Or, he could flee the country in the face of criminal prosecution.  Russian might welcome both him and the national secrets he brings with him. Alternatively, his bank account in China might allow him to purchase a television network, as has been rumored.  If he chooses show business as an exit route, he faces an uphill struggle. His long neglect of Covid-19 has devastated the industry.

Streaming video is doing well at the moment. But the artists who create those films have been hampered by lockdowns.  Between February and May of this year, employment has fallen by nearly 50%. (“Boom Times for Streaming, Not for Hollywood Jobs,” by Justin Fox, Bloomberg Businessweek, November 23, 2020, pg.76.)  Worse, the increased productions protocols required to do filming have increased costs by 20%  The increase is why many jobs have fled to Canada where the infection is less rampant.

Movies theaters that once drove the film industry are in peril, as well. Many have shut down and aren’t expected to survive the pandemic. (Ibid. pg. 76.)

Shakespeare wrote that all the world is a stage.  If Trump returns to the entertainment business, he’d better hope the Bard is right and the lights are on in China.