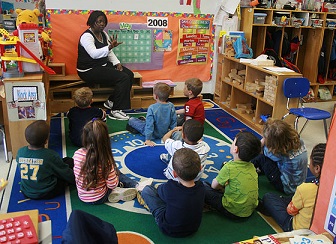 St. Ignatius Loyola, a Jesuit priest, is credited with saying, “Give us a child till he’s seven and we’ll have him for life.” Growing up as a Catholic, I believed  Loyola until I  turned eleven. That was the year I left the Church to listen to the sound of my own drummer.

Studies show what we learn early in life generally stays with us. If accepting diversity is important to the nation, then youngsters should be exposed to it as early as possible.

I offer my experience as evidence. My father was deeply prejudiced against black people. Until I was six, I heard nothing but disparagements about them. Then my mother enrolled me in kindergarten. There I sat on a rose-colored carpet with classmates of different races and a teacher who seemed to love each of us equally. During recess, I formed a friendship with  Japanese twins girls who taught me how to play jacks. On other occasions, I learned that in a game of tag what mattered was speed and agility, not the color of my skin. A few more weeks sitting on Mrs. Debrolet’s carpet and I’d gained enough experience to set my father’s opinions aside as being peculiar.

For all its flaws, public education invites an appreciation for cultural diversity, provided no economic divide stands in the way.  That’s why, when I became a teacher, I opposed parochial and charter schools and was never strong on homeschooling. A parent’s right notwithstanding, the reason a democratic nation mandates and funds education is to balance diversity with an institution that promotes social cohesion.

Unfortunately, our current Secretary of Education, Betsy Devos, is the product of a private school whose goal it was to “equip minds and nurture hearts to transform the world for Jesus Christ.” Having little appreciation for diversity but a clear understanding that education can be a tool for indoctrination, she has waged war against the public system, believing that charter schools can transform us into a Christian nation. Michigan, her home state, is where she began to implement her ideas, arguing that charter schools expanded choice. In truth, It did the reverse, impoverishing public education and diverting low-income students to poorly performing centers.

In a recent blog, I mentioned the importance for each of us to nourish that spark of human recognition within ourselves that allows us to comfort one another. I was referring to no mystical plateau attainable only after years of yoga practice. I was speaking of the transformative power of a good, public education–an eclectic place where, spurred by diversity, compassion can thrive. If we are passionate about our desire to preserve our democracy, then we must be passionate about breathing life into public schools. One does not live without the other.