Once More Through The Looking Glass 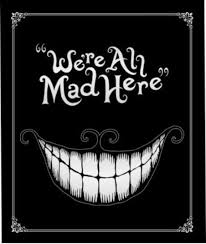 A friend at the retirement center sat down beside me one afternoon in the temporary lounge that management had arranged, its chairs set 6 feet apart.  It’s a place where residents are supposed to carry on conversations while masked. Despite her face covering, I heard a sigh as she sank into the upholstered chair she’d turned in my direction.

“How are you doing?” I shouted across the chasm.

“So much better,” she replied.

Her response surprised me.  The choice of words made me wonder if she’d been ill since I’d last seen her?

After a further inquiry, she went on to explain how relieved she was to have the 2020 election behind us and was glad Joe Biden had won.  “I feel I can breathe again,” she said.

I laughed in response, knowing how she felt. The world, of late, seemed to be living at the edge of a tulgey wood. During the past few months, I, in particular, have felt like a gibbon swinging from branch to breach in an attempt to escape a wildfire.

Faced with the double whammy of a pandemic and a national election–the results of which an enraged Donald Trump refuses to acknowledge–I remain less sanguine about the future than my chair-companion. If I owned an Ouija board, I doubt I’d consult it. Why poke the future?  What I know of the present is scary enough. The number of Covid-19  bodies stacking up in refrigerated trucks outside hospitals is staggering.  Meanwhile, those who survive either live like hermits or gamblers.  The latter are those we see bare-faced, cavorting in the public square in the mistaken belief that First Amendment rights are equivalent to good hygiene.

Frankly,  I pity the challenges awaiting incoming president, Biden. How will he convince us to embrace the inconveniences necessary to address climate change if wearing a mask during a pandemic provokes insurrection?

For some reason, expertise has fallen out of favor in this country. Scientists, for example, are among those least respected. Donald Trump’s Theater of the Absurd has left much of the population mindless. We face is an epidemic of ignorance while the pandemic rages.

Too much of the country seems willing to applaud the antics of a man who is mentally ill. They salute Mike Flynn’s call for sedition as the words of a patriot.  They even imagine the cadre of buffoons led by Rudy Giuliani to be defenders of democracy. The rest of us look on in horror, aware that a nation led by a lunatic, a traitor, and the incompetent will not stand.

Congress remains in session but offers little guidance or financial relief to the masses in this time of upheaval. Instead, they squabble among themselves like chickens drunk on fermented crack corn. Mitch McConnell purports to be the Senate leader, but he has a single goal: to fill every judicial vacancy with a right-wing radical.  Heedless of the chaos around him, he is persistent at his task, his head bent to the ground like a beetle building a dung heap.

At 78, he is unlikely to face the consequences of his putrid legacy. Looking to the future, his permissive neglect in all other aspects of government will leave the Republican party in the hands of aging Tea Party enthusiasts and the newly arrived followers of QAnon.

The overwhelming question before us is how long will Trump’s acolytes remain mesmerized by his theater once he leaves office. I fear it will be too long. Biden is no showman and truth is out of fashion.  I hope he knows he confronts a sobering reality. “We are all mad here.”