Making A Hell Of Heaven On Earth 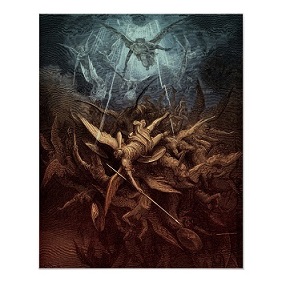 The dividing line between church and state required by our Constitution is as fragile as a dry leaf. Republican Senator Marco Rubio, for example, took a righteous tone against Democrats who dared question Amy Coney Barrett’s brand of Catholicism during her confirmation hearings for the Supreme Court. Her religious views were irrelevant, Rubio insisted. Months later, he attempted to scorch Reverend Raphael Warnock, Georgia’s Democratic candidate for the U. S. Senate, for having religious views and expressing them during a political speech.  Apparently,  the Reverend’s religious opinions weren’t irrelevant. The same disconnect was true for a Catholic Bishop. Unable to hold his tongue when Joe Biden won the 2020 Presidential election, he warned his flock that though the President-elect was a Catholic, he couldn’t be trusted because of his pro-choice stance.

Judges also like to treat the Establishment Clause as if it were putty. Conservative Supreme Court Judge Antonin Scalia provides an example.  In 1990, he wrote the Court’s opinion in the case of Employment Division v. Smith. Two American Indians had brought a complaint against the state of Oregon, arguing they’d been unlawfully denied unemployment benefits.  The state responded that the men were fired because they used peyote in their religious ceremonies and, as they’d broken the law, they weren’t entitled to unemployment benefits. Scalia sided with the state.  “It is impossible to provide religious exemptions from civic obligations whenever a person disagreed with the law.” (“Free Exercise Clause,” by Erwin Chemerinsky and Howard Billman, Freethought Today, November 2020, pg. 3.) Sixteen years later,  in 2014 in the High Court ruling on Burwell v. Hobby Lobby, Scalia took the opposite view. In this case, he agreed with four other conservative judges that business owners could deny employees contraception coverage provided under the Affordable Care Act if doing so was contrary to their religious conviction.

The role of religion in societies is fraught with so much argument and confusion that the question has attracted the scrutiny of scholars around the globe. One of their discoveries is that religion is on the decline. (“Giving Up on God,” by Ronald F. Inglehart, Foreign Affairs, Sept/Oct. 2020 pgs. 110-118.) People seem to be praying less and enjoying themselves more. The reason is growing global prosperity. With health and longevity on the rise, some traditional norms are falling away, particularly those that are centered around fertility. Historically, the church and state were aligned in their strictures regarding female behavior—measures, among other things, intended to counteract high infant mortality and low life expectancy. For a society to survive, births had to keep up with deaths. (Ibid, pg. 116)  On average, a woman in her lifetime gave birth to as many as 5 to 8 children. (Ibid pg. 115.)

Today, that rigid yoke placed upon women is no longer necessary and, except in the Muslim world, (Ibid, pg. 116.) they are enjoying greater personal freedoms. Nordic states,  the nexus where women’s rights and secularization meet, enjoy cultures of greater harmony and progress than others. According to the World Values Survey, a report containing data collected over many years, they are societies that “have the lowest level of corruption.” Religious countries, to the contrary, “tend to be more corrupt than secular ones.” (Ibid, pg. 117.)

The assumption that a shared religion provides social cohesion is wrong. What it can do, according to Ronald Inglehart, Professor Emeritus at the University of Michigan, is create an atmosphere of absolutes which give rise to fanatical intolerance…” (Ibid, pg. 118.) Religion, he concludes, “may make people more punitive but it does not make them less corrupt. (Ibid. pg. 117.)

By way of contrast, according to the World Values Survey, members in secular societies give an “increasingly high priority to self-expression and free choice, with a growing emphasis on human rights, tolerance of outsiders, environmental protection, gender equality, and freedom of speech.”  (Ibid, pg. 118.)