Long May It Wave 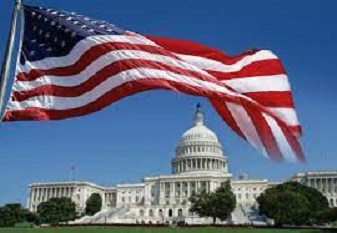 In my early teens, as an entrant to long-range shooting competitions, I heard these words many times while I stared down the barrel of my Remington 22, the sites adjusted for wind, gravity, and heat factors.

My father stood behind me, his rifle slung over one shoulder as he awaited the adult competition.  In the distance, my stepmother sat in a folding chair, sheltered from the sun by the branch of a leafy tree. She took no interest in guns. Her satisfaction was to see my father and me together.

My dad bought my gun as a birthday surprise.  After that, he made certain I took care of it, insisting I scrub the barrel inside and out and shine the stock to a honeyed luster.  He didn’t have to hover.  I enjoyed the task and the smell of gun oil.  Soon after his gift, he bought me a membership in the National Rifleman’s Association (NRA).

Each month their magazine arrived in the mailbox with stories and articles about gun safety. If there was an NRA workshop in town, the pair of us would attend.  Mostly the hall was filled with men which meant my father was quick to set anyone straight who hazard a puzzled glance.

“She can shoot the buttons off your shirt at 100 paces and so close, you won’t feel the bullet’s breeze,” he’d say.  Usually, he’d be standing behind me with his hands placed on my shoulders as if they were epaulets.

In those days, people kept guns in a locked cabinet.  Today much has changed. Today, folks carry guns into restaurants and supermarkets as if they were a fashion statement.  That’s because, in 2008, the U. S. Supreme Court ruled the Second Amendment permitted people to open carry.

Some think the judges made a mistake and blame the rise of gun violence on their decision.  More than half the nation wants to control gun sales. The remainder insist the violence argues for more guns on the streets, in the churches, and in schools to protect the innocent.

Recently the minority has expanded its argument. To open carry is a form of symbolic speech and protected under the First Amendment, they say.  No one should laugh. In Citizens United, a Supreme Court majority ruled money was speech.

In the past, gun advocates have been eager to portray the Second Amendment as being harmonious with the First. They’ve claimed citizens who carry guns in public squares are more likely to have their voices heard. So far, however, jurists have remained silent about open carry.  Is it or isn’t it protected speech?  Enthusiasts who press for a verdict are playing a dangerous game–arranging a shootout between the First and Second Amendment which could tear holes in the U. S. Constitution.

Black Lives Matter is a movement that opposes racial prejudice.  Demonstrators insist minorities are disproportionate victims of gun violence.  The anger they have released is a genie unlikely to go back in the bottle.  Even so, bloodletting isn’t confined to the bleak neighborhoods of poverty. Rivers of blood have flowed in mosques, synagogues, Amish schools, public schools, Christian churches, department stores, and massage parlors, to name a few.  May I also point out that police officers are victims of assault as well?

The country lives in a state of angst, pulled between the tragedies guns have wrought and a fear of living defenseless. Yet, I know of no one credible who argues for a total ban.  Guns can afford protection. They are also a form of recreation, historical artifacts, and objects of beauty. But to everything, there is a season—a time to kill, and a time to heal.

Today, the nation’s flag flies at half-staff. During Joe Biden’s brief presidency, it had been lowered three times. If We The People fail to make gun violence a common cause, I doubt our flag will fly freely any time soon.