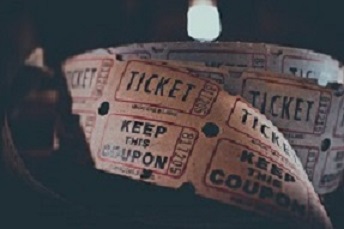 Last week, I went to a movie playing in my neighborhood.  At  3:10 in the afternoon, the lobby was quiet enough to hold a séance.  Loneliness has never bothered  me, so  I shoved 8 crumpled dollars under the cashier’s window to buy my ticket.

“What seat?” the woman spat into her microphone.

As the theater was empty, I supposed my location little mattered.  “Oh, I don’t care.  Anywhere.” My hand waved in the air like a drunken bee to show my indifference.

“You have to choose a seat.” The electrified voice was insistent.

Looking around, I noted the lobby was still empty. No Genghis Khan hordes had crept behind me, undetected. Perhaps the flutter of my hand had been confusing.  Clamping both to my sides, I spoke again. “I assure you, I don’t care where I sit.”  I enunciated slowly so that my words would penetrate to the other side.

Despite the glass’s thickness, the woman’s sigh was audible.  “Front or back. Aisle or center? You have to choose.”  She tapped at a seating chart pasted to the window between us.  Her demand was insistent, as if a sniper might be waiting for me inside the theater and she didn’t want him to miss.  My voice registered my suspicion.

“What if I don’t like my seat and want to move somewhere else once the movie starts?”

As time was passing, I pointed mindlessly to somewhere in the middle of the square.  A ticket slid toward me across the wooden counter.  Next, a disembodied hand from the other side waved me away

I stood, for a moment, squinting at the square of paper in my hand.  The number was blurry and I’d left my reading glasses at home.  Having no choice, however, I proceeded toward the neon signs until I found one that blinked.  Number 10.

The film was amusing, though I laughed alone, my voice ricocheting against the walls of the empty theater. Not even an usher bothered to flash a light to see if I was in the right location.

If lightning had struck during the film, a seating chart could have proved valuable, I suppose.  At least, my charred body might be identified. I could imagine the ticket seller providing my epitaph to the police.  “Oh her?  What a lip she had.  I put her in the  center seat in the center row of the theater #10.”

I’ve always hated senseless rules with a “gotcha” feel.  Take the one about grass in a Florida community.  A man left his home to care for his dying mother.  Upon  his return, he found he’d been slapped with a $29,833.50 fine.  The grass had grown too high for too long. (“Only in America,” The Week, May 24, 2019, pg. 6.)  Or, consider the school teacher who took sick leave to fight her breast cancer.  Gone for more than 10 days, city rules required her to pay her substitute’s salary. No doubt that speeded up her recovery.  (Ibid, pg 6.)

Of course, no one beats Donald Trump’s administration for  gottcha rules. Most recently, the government decided to deprive housing assistance to undocumented migrants.  Someone must have thought it was better for people to sleep in the streets.  But the bureaucrats forgot 70% of that population was children. Americans.  Born and bred in the U. S. of A.  (Ibid pg. 6.) The government has suffered some embarrassment because of the oversight. But there’s been an additional, unforeseen consequence.  As a birth name, Donald has dropped in popularity 39 places. (Ibid, pg. 6.)