Fanfare For The Straw Man 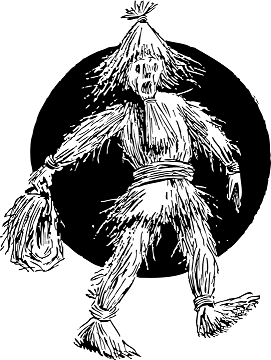 Last week a woman on Facebook was drumming up support for a Oregon petition.  The purpose was to prevent the state legislature from raising the gas tax to pay for road improvements.  That people complain about potholes but don’t want to pay to fix them, isn’t new to me .  As a former politician, I’ve heard the outrage before. Unfortunately, I never mastered the art of getting public works done for free.  On this occasion, I suggested the Facebook woman move to Mississippi where taxes are low, as is the quality of life.

Stumbling across my remark, a gentlemen took umbrage.  He called my perspective “stale,” and surmised I was a member of the rich elite who didn’t care a fig about how the working class scrapped to get by.  His was a lazy, ad hominem attack.  Instead of proposing an alternative to taxes, he chose to create a straw person.  Identifying me as a member of the elite, he gave himself permission to walk away from the discussion, satisfied he’d delivered his “devastating” blow on behalf of class warfare.

Such intellectual dishonesty is prevalent in America, so much so, that I begin to fear more straw people exist in our country than real ones. How will this phenomena affect the census, I wonder?

Certainly the country seems to have transformed itself into the land of the Jabberwock, a place where folks stalk imaginary windmills, promote  “alternative facts” and describe any news they dislike as fake.  Few feel obliged to open their minds. The result is a society in perfect in balance, like a teetertotter, where willful blindness afflicts conservatives and liberals alike.

Do others observe the buffo in this circus? Or have we reached the state where, in the land of the blind, an individual who can see is to be pitied?