A World Made Of Clay 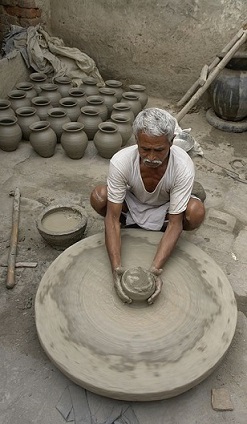 What a year 2020 is turning out to be.  A pandemic, the upcoming elections, and the untimely death of Supreme Court Justice Ruth Bader Ginsberg are vying for top spots in the headlines. Given the cacophony, it’s little wonder few have noticed another woman has cracked a glass ceiling.  Christine Lagarde of France, the first female to serve as chair of the International Monetary Fund, has moved on to become the first of her sex to preside as president of the European Central Bank.  Unwilling to rest on her laurels, Lagarde is not only coping with Covid-19’s economic upheaval, but she is also looking ahead to the larger issue of climate change. Her objective is to design financial policies that encourage investments in a green economy, a hard sell to bankers wedded to oil. (“Greening Europe’s Monetary Policy,” by Jane Randow, Bloomberg Businessweek, Sept. 21, 2020, pgs. 32-33.)

As a woman, she may have greater success in changing the minds of her male counterparts, however.  Rightly or wrongly, women are deemed to be more trustworthy than men. When they exercise power, they face less skepticism about their motives. The Congressional record since 1861 supports this view. Among all the elected officials who have been expelled, censured, or reprimanded for wrongdoing, only one was a woman.  In 2012, Laura Richardson received a slap on the wrist for pressuring her House staff to work on her political campaign.

Science disagrees with this folklore about women’s virtue. True, studies show females are less likely than males to put their hands in the cookie jar, but researchers explain the reason has nothing to do with innate honesty. Social conditioning is at work. Living as underdogs for centuries, women not only have had little opportunity to be corrupt, but their inferior status has taught them to be risk-averse.

Yeara ago, the philosopher, Immanuel Kant wrote a treatise on virtue. He defined it as an act that takes precedent over self-interest. Morality, he insisted, derives from immutable principles which he called Categorical Imperatives. When a principle and self-interest clash, a moral individual is guided by the imperative.

Socrates’ death serves as an example.When Athens decreed that the famed teacher should be put to death, charging him with impiety and for corrupting the minds of the young, the condemned refused to escape, though he had opportunities. Instead, he accepted his fate, arguing that as he’d enjoyed the benefits of being a citizen of the city, he was obliged to obey its laws. Though born centuries apart, Kant would have recognized Socrates’ decision as one driven by a Categorical Imperative–to obey the law– and would have accorded him respect as a moral man.

Little of Socrates’ or Kant’s view of virtue exists in modern times, though there are exceptions: the military, public servants who risk their lives in a crisis, and those we identify as heroes because, at a critical moment, they endanger themselves for a higher good. In the main, in the day to day world of commerce and politics, Categorical Imperatives are so diminished that virtue morphs into wet clay, molding itself with ease into any form that serves self-interest. In the 17h century, I believe it was the French moralist François de La Rochefoucauld who best described this transformation. To create a stateman, he explained, one needed to align public good with self-interest.

Mark Zuckerberg, an icon of youth’s desire to reshape the world and improve upon it, seems to have found his way to statesmanship without a map. His alliance with Trump is remarkable, given the two appear to hold few values in common.  Even so, this young man knows Trump’s power to chop his company, Facebook, into tiny pieces or strangle it with regulations. That he chooses to accommodate a power that can destroy him, isn’t surprising.

Unfortunately, by closing his eyes to this accommodation, he has set himself along a path divergent to his goals. His platform, designed to create a space for social engagement and free speech, has been co-opted to serve the President’s lies*, which seem to be Russia’s lies as well.  Though he may fail to see it, Zuckerberg is being dragged through a tulgey wood of miscommunication– a dark place more disorienting, more divisive, more fake, and more capable of threatening our democracy than anyone could have imagined. (“Facebook is a Totally Neutral Platform,” by Kurt Wagner,  Bloomberg Businessweek, Sept. 21. 2020, pg. 51.)

Am I wrong to feel empathy for someone young, like Zuckerberg who is following in the footsteps of his elders?  Isn’t that what society wants the young to do?  Of course,  I don’t blame him for his missteps. Look at the role models for statesmanship we have provided– Mitch McConnell and Lindsey Graham .In the shadow of these two men, for whom a plea of youth, stupidity or madness offers no excuse, all virtue fades to black.  Neither their principles nor words have meaning, not even for themselves.