A Tale Of Two Pandemics 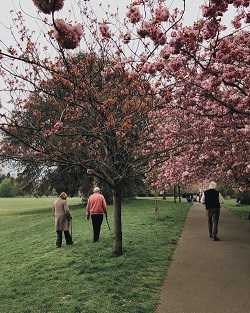 During this pandemic, I keep reflecting on the opening lines of Charles Dicken’s A Tale of Two Cities: It was the best of times and the worst of times.  The words suggest that fate has a fickle side.  For example, thieves might be happy that wearing a mask in public is acceptable.  Benjamin Netanyahu is probably happy, too. The chaos of the coronavirus has allowed him to retain his grip on Israel.

As to the worst of times, those of us who are appalled by Donald Trump’s leadership thought we had seen it all– lies, greed, sexism, corruption, bullying, incompetence, and a country divided by his hate—but during this epidemic, his indifference to the common man is embarrassingly evident. Not only was his previous tax overhaul a gift to billionaires but the latest Caronavirus Aid, Relief, and Economic Security bill (CARES) is a joke at the expense of small businesses and the worker. Presumably, Congress intended to keep both whole and the amount set aside seems generous at $377 billion. But $510 billion of that $2 trillion packages is earmarked for big companies like Boeing. In addition, $454 billion will go to the Federal Reserve to give liquidity to banks. (“The Cares Act is Socialism for the Rich,” Amit Seru & Luigi Zingales, WST excerpt, The Week, pg. 34.)

On the plus side of the pandemic, the common man has shown more grit and courage than what’s come out of the White House.  Not waiting to be rescued by their President, individuals are pulling together to fight the disaster that threatens them. Governor Andrew Cuomo of New York may not be a common man, but he doesn’t control the Treasury or the assets of the Federal government.  Even so,  he’s envisioned a coherent plan to share scarce machinery and equipment across the nation. True, the government has stockpiles of supplies but the president’s son-in-law says they are reserved for “us.”  If “us” isn’t the people, I have no idea whom he means.

Cuomo isn’t waiting for an explanation. Nor is Kate Brown,  governor of Oregon, the first to respond to New York’s plea with a  commitment of 140 ventilators. Also, to the White House’s shame, China is sending another 1,000 machines.

Further down the pecking order, we see evidence of great courage. We all know whom I’m applauding–doctors, nurses, hospital workers, postal workers, bus drivers, and grocery clerks, to name a few. In spite of a shortage of personal protective equipment, these people risk their lives each day to provide vital services to the country.  Regrettably, too many are falling prey to the virus because of the scarcity. Today’s rough count of deaths among their numbers is 1,119.

Even people without vital work assignments are doing their part.  Many sit at home producing facemasks from scraps of cloth to protect those who must expose themselves to the virus. Others are shopping for neighbors or serving as volunteers for programs like CovidSitters, providing dog walking, lawn cutting, or running errands for those on the front lines. No government-orchestrated responses, here.  Just a wellspring of spontaneous goodwill.

Not the least of these contributions come from those who shelter in place, choosing to do no harm. That service is far from small and is helping to thwart the virus.  Yesterday, from my window, I watched as a  married a couple I know was strolling on the grounds of the retirement center. They’ve shared a bed for over 55 years.  But on that day, they were wearing masks and keeping a 6-foot distance between them.  A sweet gesture, I thought–a symbol of a nation pulling together, each in his or her way and for the good of all. I call that evidence of the best of times.