by Caroline Miller
democracy and consensus, Lemurs, PBS Nature, tension between youth and age, the pace of social change
0 Comment 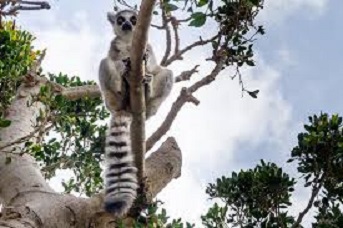 On the PBS program, Nature, there’s a 5-second introduction that never fails to delight me.  A baby Lemur sits pressed against its mother as the pair sit on a tree branch that overlooks an expanse of jungle.  Suddenly, the baby decides to explore the far end of the limb but manages only a few measured steps before its mother jerks it to safety by its tail.  That classic tension between a curious youngster and a parent’s guarded wisdom is universal in most mammals, I suspect.

The film sequence came to mind, recently, while I exchanged thoughts with a young woman on Facebook.  For her, social justice was moving at a snail’s pace or not at all. As I am 83, I offered a different view. She was, I wrote, being too pessimistic. I ended my remarks with the example of the water glass being considered half full or half empty.

After the exchange was over, I decided my response had been too condescending. Unlike the young woman, at 83, I’ve walked a road long enough to take the measure of a few accomplishments. I can’t blame her for not remembering that sixty years ago a married woman wasn’t allowed a credit card without her husband’s permission, and sexual harassment was just “boys being boys.” Today, a woman is about to become Vice President of the United States. I call that progress.

What makes me happy, as well, are public water fountains that are no longer designated “for whites” and “for blacks.” In the past, a visitor might have imagined different water belonged to different people.  Interracial marriage is common these days.  In the past, it was illegal. Attempting it might get lovers killed.  Same-sex marriage wasn’t possible, either.  Same-sex anything of a personal note could land someone in jail.

People couldn’t expect a minimum wage in the good old days. They got what the boss offered. If they lost their jobs, the only safety net was a few weeks of unemployment benefits. After that, workers were on their own, unless they were mentally ill.  In that case, they risked living in an institution without parole and not much medical treatment, either.

The progress I’ve listed is suggestive and not complete. Nor did those changes come easily. Many people took opposing views and burned with a passion equal to that of the reformers. At times, the debate was incendiary.  At times, violence spoke louder than words.

In a free society, progress is slow because nothing is done without forming a consensus. Democracy is like a man stumbling forward on stilts, using one leg in opposition to the other until he achieves balance. That balance doesn’t happen overnight. It requires patience.

Nature seems to respect patience. It can take an eon to add one dot to a butterfly wing. It can also explain why old people are tolerated longer than might be expected.  Certainly, we have nothing to add to procreation and are, therefore, a burden to evolution. Even so, Nature seems to prize one virtue. Our institutionalized memory keeps young lemurs from falling out of trees.