Puzzling Out The Future 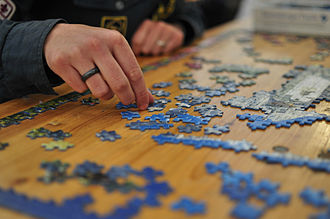 At the retirement center, I sank into a chair opposite a man who once had a distinguished career. Knowing he wasn’t a loquacious individual, I started the conversation, asking how he’d spent his afternoon.  “Reading,” he replied.  “It passes the hours.” The previous day, I’d stopped to talk to a woman who’d been the top executive of a corporation. She was putting a jigsaw puzzle together.  I asked if she was making progress. “It doesn’t matter,” she replied. “The days are long. Puzzles pass the time.”

The pandemic has done much to narrow our lives. Each new virus variant poses a threat. Going to the grocery store is an act of courage. Life in the vacuum of safety teaches us what we value most. Contact with family and friends. (“Rethinking Work and Life,” by Joann Jenkins, AARP Bulletin, July/Aug, pg. 44.)

Those who are old have a long memory. So much has altered since childhood, not all of it good. Climate change chokes us with guilt. The endless wars fill us with despair. Medicine and science are bright spots. The changes they offer can seem miraculous. Technology’s contribution is in question. Is it building a world we want, a world of human connection?  Or, is it building walls?

At the moment, the internet seems to be splitting apart. Web3.0 is headed in one direction. Web3 pulls in another.  Do we understand the difference?  Though it has yet to be completed, Web3.0’s goal is to connect everything to everything else. The presumption is linkage will make life convenient. Changing an address on LinkedIn, for example, becomes a change on every site. We can see the advantage. Linkage is what makes Wikipedia, Alexa, Siri, and Google work. Unfortunately, it also facilitates the spread of propaganda, and conspiracy theories, not to mention its usefulness to hackers.

Web3, which is also under construction, works in reverse.  We will store our information in silos only we can access. In effect, we become private platforms, sharing information as we chose and denying corporations like Facebook and Amazon the ability to mine our data. This decentralized internet uses blockchain to code and safeguard our information. But is the system safe?  Some say “no,” pointing to the hacks that have already occurred using blockchain. Others worry designers will cut corners to be the first to put their network on the market. Turn the idea of high security on its head, and we must wonder how Web3 will facilitate future insurrections?

How these systems will interface is another question.  Or, will they interface? Either way, what’s the public benefit? Frankly, I share Jack Dorsey’s skepticism, the co-founder of Twitter. He believes the venture capitalists who are pouring money into these two systems are thinking more about profits than people  He predicts  Big Tech won’t free us but will continue to hold the reigns.

My bottom line questions how these new technologies will affect the life of the man who spends his days reading mysteries, or the woman who does jigsaw puzzles. We have no present way of knowing. If we did, would it matter? So much money has been poured into Web3.0 and Web3, we will be dragged into the future whether we will it or not. Youth, with no memories, will have it so.