by Caroline Miller
art as revelation, art's ability to transfix, genius and money, John Keats, Ode to a Grecian Urn, Stendhal, the leeches of art, the nexus of science and art, the Stendhal Syndrome
6 Comments 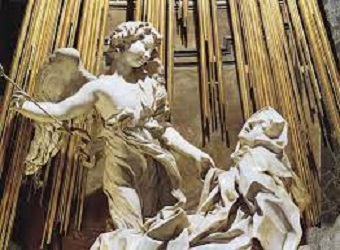 Moments exist in my life when I have stood transfixed by a work of art. A 1965 performance of Prokofiev’s ballet, Romeo and Julie in which Rudolf Nureyev and Dame Margo Fontaine danced the title roles is one example. Rembrandt’s painting, The Return of the Prodigal Son is another.  Edvard Munch’s, The Sick Child is a third.

I’m not unique in being stirred by a vision. People have wept at the foot of Lincoln’s memorial in Washington D. C.  The Vietnam War Memorial provides a similar response. Not every work evokes tears from every individual. Tastes vary. But the rapture is universal.  It’s called the Stendhal syndrome.

In the 19-century, French author Stendhal wrote in his book, Rome, Naples, and Florence,  about the ecstasy he felt when he visited the  Basilica of Santa Croce in Florence and stood at the burial sites of great men like Machiavelli, Michelangelo, and Galileo Galilei.  His depiction struck familiar a chord, and because he captured that affliction with eloquence, it assumed his name.

Similarly, in 2018, a tourist visiting the Uffizi was so overcome by the beauty of Botticelli’s The Birth of Venus, he suffered a mild heart attack. Happily, he survived.  Others have escaped such a serious illness, but they continue to swoon at the feet of Michelangelo’s David. (“The Aesthete’s Diet,” by Fiorella Valdesolo, Town&Coluntry, May 2021, pg. 26.)

Despite these occasional vapors, art’s ability to slow us down has a positive effect on human health.  Not long ago, Canadian doctors were so convinced of its therapeutic benefits, ”they began to hand out to their patients a prescription for museum visits.”  (Ibid, pg. 24.) Those who took the advice showed a marked reduction in cortisol, a hormone that negatively affects sleep, digestion, and the aging process of the skin.

I’m not surprised. When we escape ourselves and submerge into a work of art, we invite the aesthetic and mystical into our lives. The poet John Keats said it best, “Beauty is truth, truth beauty,—that is all  ye know on earth, and all ye need to know.” (Ode to a Grecian Urn)

Art has been important to our species since cave people painted on the walls of  Kakadu or Bheimbetka.   Unfortunately, over time, money became a measure of its importance, making it possible for a young Van Gogh to toil at his canvas in a wheatfield and be ignored. Yet, more than 100 years later, that wheatfield, overshadowed by crows, is worth millions of dollars and considered a masterpiece. Similarly, books and music that sell well get respect.

Unfortunately, where money pools one finds leeches. I refer to those who feed upon an artist’s dream. Some offer legitimate services.  Others are bogus.

Each day I find my email jammed with offers.  Mostly, I delete them.  Recently, however,  I received a proposal that struck me as curious—an offer to turn one of my novels into a screenplay. Knowing the obstacles, I gave the suggestion a gimlet eye but shared it with a fellow writer who is working on a screen version of her novel.

My friend checked out the offer, diving in as far as the fine print. For $300, someone would read 5-pages of her book and decide whether a film version had merit. The pair of us laughed when she shared what she’d learned.  I’d uncovered another leech in the pond.

Thinking about leeches, I wondered if scientists faced similar scams. I’m inclined to doubt it.  The rigors of science winnow out all but the most prescient acolytes.  Art, on the other hand, is open to any practitioner be they dabblers, aficionados, or geniuses. The level of engagement little matters. What’s important is art’s call to the human spirit.

Of course, science has its mystical side, those Stendhal syndrome moments when the beauty of the natural world catches a scholar by the throat, and being transported by the elegance of the natural order, he or she or they stops to gasp for air. That is where art and science meet–at the nexus of knowledge and beauty.