by Caroline Miller
effects of indoor plumbing on skin health, Getting Lost to Find Home, perils of frequent bathing, soap and the skin's natural barrier, soap as a skin irritant
0 Comment 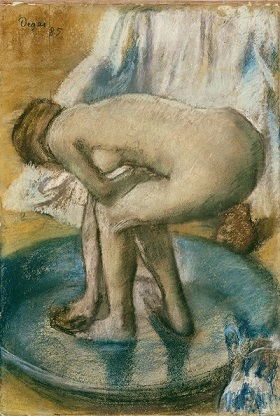 In my upcoming memoir, Getting Lost to Find Home, I describe a scene outside a Kenyan village where I was seated in a first-class train compartment opposite an Indian man. We were waiting for other passengers to board, time enough for me to take the measure of my traveling companion.

A young woman at the time, I judged the Indian to be in his mid-thirties.  He had a pleasant face but wasn’t handsome.  Even so, I was unable to pull my gaze away from his turban.

His suit was standard white linen, but the cloth encircling his head was blue, the color of a robin’s egg and so intense in hue, it reminded me of a small bay in Zanzibar where I’d once spent an afternoon swimming.

The man leaned forward, a slight smile parting his lips. “I’m guessing you are an American.  Am I correct?”

The clothes I was wearing, I’d brought from England, so they couldn’t have given away my national origin. Did my manners reflect those of an entitled American?

Noting my hesitation, my traveling companion explained. “I heard you in the corridor when you spoke to the conductor.”

At that moment, a whistle blew and the steam engine pulled from the platform, swaying like a pregnant woman.  The man and I lurched from side to side in concert with the movement, but our conversation continued.

“On occasion, I watch American television and see many advertisements for soaps and shampoos and detergents.  I wonder if you could enlighten me.

“If I can,” I nodded, wondering what could be curious about these items.

“I have the impression your people bathe every day.  Is that true or do I mistake?”

I blinked with extravagance as if I intended my eyelids to make a sound.  “Yes.  Of course, we do.”

“Even if the climate is cold?”

Satisfied yet with a furrowed brow, the man fell back against his red-cushioned seat, raising a cloud of dust behind him.

“But why?” His voice had risen a decibel or two.  “Why do such a thing?  Excessive bathing is bad for you.  Very bad.  I’m surprised you Americans do not know that.”

To learn my reply, readers must wait until I’ve published my memoir, but I will satisfy the curious to this extent. No heated exchange between us followed.  As it happened, my traveling companion disembarked after a few miles, a distance of no more than five or ten miles.

Why I should remember this small incident, given all I encountered in Sub-Saharan Africa, might puzzle some. A callow youth, I’d be expected to shrug off the man’s remarks, discounting them as coming from someone born in a third-world country. But life has a sense of humor, I’ve found. In my middle years, my memory of the man in a turban that was the color of a robin’s egg reasserted itself like an overdue tax bill.

“Nix on the showers,” said the dermatologist I’d consulted about a rash. “Clean your smelly parts, but don’t hit the tub or shower more than once a week.”

Science, it seemed, had adopted the wisdom of my third-world acquaintance.  Just as we don’t need to drink 8 glasses of water each day, as we once thought, frequent bathing isn’t necessary and can damage the skin.  About 1,000 species of bacteria and 80 species of fungus live on its surface.  Harmful microbes do exist, but the majority support our immune system, keeping pathogens from penetrating the membrane and protecting it from disorders like eczema and psoriasis. Soap destroys the oily secretions these critters live upon.

Fortunately, our outerwear is resilient and works to rebuild its ecology after a lather. That’s why frequent handwashing does no permanent harm and the health benefits of doing so–these appendages being our primary connection to the outside world–outweigh the risks.

That we don’t dissolve in the water, I’ve always considered one of Nature’s gifts. On a harrowing day, a shower or a hot bath can provide more relief than a therapist. Even so, we should go easy on tap water. Being an environmentalist includes protecting the skin’s flora and fauna.