Michelle Obama Got It Right 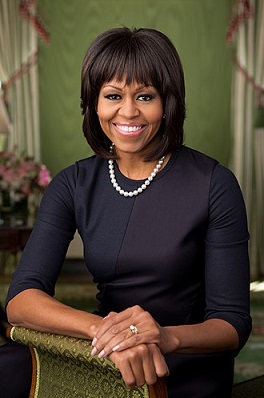 My hairdresser had moved away, a small tragedy compared to what’s going on in the world. Even so, most women know what it’s like to lose a beautician who understands their hair. Recently, I found a new salon and a new hairdresser. She gave me a great cut and shaved $5.00 off my usual fee. But let me begin at the beginning.

On the day of my first appointment, I arrived at the salon early. In the tiny shop, three beauticians were busy at their stations. I took a chair near the one who charged $125 for a haircut.  Not my beautician, obviously.  Making myself comfortable, I noticed her customer was reclined in her chair with her eyes closed, though I saw nothing happening.

The woman was somewhere in her early twenties, her strawberry blonde hair rippling to her waist like the locks of a water sprite.

“Is she sleeping?” I half-whispered to the beautician after a period of silence.

“No. She’s having her eyelashes curled and darkened,” came the reply.

“Oh.” I nodded and sat back as if I were familiar with the procedure.  “Is it expensive?”

A quick mental calculation led me to conclude the luxury of dark, curly lashes would set me back $600 a year, not counting tips.  In 10 years, I’d shell out $6,000. That’s a lot of groceries, I thought.

Understand, I’m not judging the young woman reclining in the chair. At her age, I might have done the same. I’m observing that values change as we grow older.

The Covid pandemic might have taught us something, however.  The future is unpredictable and money, being fluid, ebbs and flows according to conditions beyond our control. A good financial plan is one where there’s a line item for catastrophes. Dark eyelashes mean nothing to the pharmacist who fills an insulin prescription.

Though they aren’t like most of us, we would be wise to learn from the rich.  We shouldn’t be fooled by their apparent extravagance—the yachts and multiple homes. Those expenses represent a smaller percentage of their income than dark eyelashes represent for a working girl. To be candid, the rich are stingy.

Take Elon Musk as an example.  He says he plans to vote Republican in the future because he’s outraged by the Democrats.  He doesn’t have ethics in mind. How could he support the Grand Old Party when it’s governed by white nationalists and conspiracy theorists?  No, he rages against Democrats because he fears they plan to increase his taxes. He and his ilk share a common desire to hang on to their lucre not only in the here and now but beyond the grave.

Whatever luxuries Musk and his cohorts purchase, whatever charities they support, the amount they spend is no more than an eyedropper’s worth when compared to the financial privilege they wish to secure in perpetuity.  Though some have talked about giving their wealth away before they die, that’s a charade. Today’s uber-wealthy have ambitions far beyond that of their predecessors, the Rockefellers, Carnegies, and Vanderbilts. Those gilded families of old secured their empires through trusts. This new lot wants dynasty protection.

They are likely to get their way because, over the past 40 years, robust taxes on the wealthy have crumbled. Today, the top five dynastic families have so much wealth that the imbalance is indecent.  They’ve seen their inflation-adjusted wealth increase 34-fold… from 15.5 billion to $525 billion. They haven’t managed that alone. Trumpian states like South Dakota follow the money. They have passed laws allowing trusts to go on forever, laws that have given birth to throngs of lawyers and tax accountants who are eager to enable the one-percenters.

A unique class unto themselves, petted and catered to by the many, the super-wealthy see themselves as apart from the rest of us. That’s why they’ve become rude and selfish.  They don’t plan to die like us, either. Should humanity lose its battle against climate change, they’ve arranged to live like royalty in luxurious bunkers or fly to Mars in private rockets.

Musk may choose to lean right in his politics, but he’s no role model for me. I choose to lean left.  I’d like to see Katie Porter and AOC  be given a free hand to revise the tax code.

If Musk weren’t so greedy, he’d see Republicans aren’t interested in business anymore. Look at Florida’s Gov. Ron DeSantis and his fight with Disney.   That Party’s focus is to root out cultural conspiracies that don’t exist. What a pity they refuse to learn from Michelle Obama.  When others go low, she goes high. If they followed her example, they’d discover that the danger to American democracy isn’t the immigrant. It’s Republican Trumpism.  And who is Trump? One of the moneyed ubers who has little in common with his followers.

Let Musk have his tantrum. He’s one vote at the ballot box. For the rest of us, there’s a single choice up and down the ticket in the next election. Democrats.