Marat/Sade In The Time Of Donald Trump 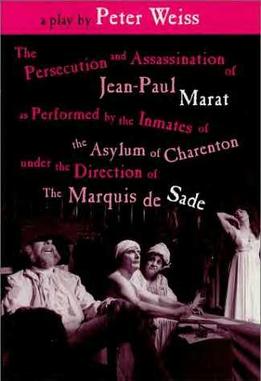 In the 1960s, Peter Weiss stunned the world with his play, The Persecution and Assassination of Jean-Paul Marat as Performed by the Inmates of the Asylum of Charenton Under the Direction of the Marquis de Sade. The story depicts a French asylum in 1808 in which the inmates re-enact  Charlotte Corday’s 1793 assassination of Jean-Paul Marat, French Revolutionary, while he baths in his tub.

The drama contains a play within a play.  The first is the historical one of political assassination.  The second exposes the lives of the inmates, demented souls who, as Sade’s performers, give vent their rage with unimaginable violence.  The Marquis, of course, sees his theater as patriotic.  He supported the revolution.  But his actors, the poor and oppressed, came out of it no better than before.  Naturally, they feel betrayed and blame society for the miserable condition in which they find themselves.

Surprisingly, this almost 60 year-old play strikes me as ripe for revival.  In the reign of Donald Trump, 45th President of the United States, we once again see madness take center stage.  Trump is a leader who embraces tyrants like Kim Jon Un of North Korea, Vladimir Putin of Russia and the Saudi Crown Prince Mohammed Ben Salaman,  accused of murder in connection with the death of journalist Jamal Khashoggi.   Trump insults our allies; threatens NATO;, builds wall where they aren’t needed; separates migrant children from their parents; violates the U. S. Constitution by declaring emergencies to fund projects Congress opposes; works with religious zealots, like Betsy Devos, to destroy public education in favor of religious schools; enables Mike Pence to defy a woman’s right to an abortion; denies climate change; vilifies women . His lies, as President, are so numerous they exhaust our notion of infinite numbers.  He boasts of his unpaid taxes.  And, at the moment, he aligns himself with evangelicals, though his religious affiliation changes to suit the occasion, along with his politics.

I could go on but why bother?  Several professionals in mental health suspect the man is insane.

As Weiss’s play reminds us, hate and fear are the unifying forces of malcontents. Trump’s rhetoric overflows with both so that his followers, most of them outliers, can flourish in his dominion. We know who they are: white nationalists, racists, skin heads and anti-feminists who argue with a straight face that white males are the persecuted members of American society.  (“Toxic Masculinity,” by Stephanie Russel-Kraft, MS spring 2019, pgs. 32-35.)

What’s new to the mix is the addition of evangelical Christians.   Their zealotry provides a pious mantle so that  hatred can caper in the spotlight costumed as a patriot.  The actors scream their lines, “Make America Great Again!” — as if the nation with its laws and Constitution were not a model for others; as if it were not a prosperous leader in the free world.

Ordinary citizens watch the performance, looking as though their breaths has been sucked from them.  Donald Trump has raised the specter of the 9th Circle of Hell and insists it is the norm.  A world turned on its head.

“How could this happen?” people murmur. Their eyes are vacant, as if what they see has left them in a catatonic state.

I have no answer.  I only know this is a time of darkest drama.  Where is the theater manager who can turn up the house lights and wake us from this nightmare?