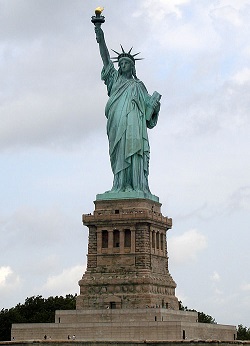 Some have argued the question of abortion rights should be left to the states as the U. S. Constitution contains no language that speaks directly to it.  The Constitution does speak to the right an individual has to pursue happiness, however, and fundamental to that right is the freedom to make decisions pertaining to one’s body.  Absent that freedom, an individual is a slave.

Allowing states to determine whether a woman has freedom of choice leads to legal absurdities. A female in California may receive safe, medical treatment while one in another state faces a charge of murder.

No nation can survive with a patchwork of human values. We fought the Civil War because permitting slavery in some areas was untenable.

Immigration laws can’t be left to individual states, either.  It leads to racial absurdities. Already, one local jurisdiction has deemed it right to separate an immigrant mother from her newborn child and give up it up for adoption because leaving the infant with a Spanish speaking parent would “place the child in danger.”  (SPLC Case Results Immigrant Mother with Baby Taken in Hospital,” a report in Combating Nativism, from Southern Poverty Law Center, 2019, pg. 20.)

Alabama’s House Bill 56 would require educators to track parents of immigrant children who attend their schools. The threat has resulted in massive dis enrollments. (Ibid pg. 25.)  Left unchecked, countless uneducated children will live among us, destined, one day, to fill the welfare rolls.

History shows us that demonizing others comes easy. Perhaps the instinct harkens back to prehistoric times when a tribe’s survival depended upon mutual trust. But that instinct is based upon fear.  A society needs values to thrive. We might begin with the one about doing unto others…