Keeping Your Head About You 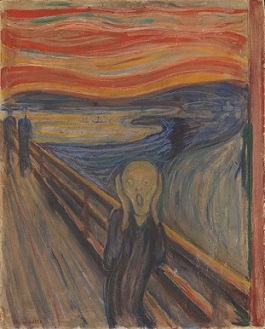 The Scream courtesy of wikipedia.org

Reading the news these days is like hitting yourself in the head with a hammer and trying to enjoy it.  Threats to human existence lie all about us. The one plus in the West is the existence of a free press. Our liberty depends on the freedom of the press, and that cannot be limited without being lost, wrote Thomas Jefferson.

A free press mirrors the state of the human condition which, at times, is tragic or absurd. The Pope, for example, eager to present himself as an arbitrator between Vladimir Putin and western democracies blames the latter for the war in Ukraine. NATO, he explains, intends to confine Russia to its borders.

As the Pope heads an autocracy, he fails to understand the concepts of self-determination, national sovereignty, and the right of a country to choose its affiliations. His complaint is ridiculous. It blames Ukraine for inviting assault, an idea tantamount to accusing pedophilia victims of bringing trouble upon themselves because they trusted their church.

If the headlines are correct, my Latin amigos aren’t much brighter.  They threaten to vote for Republicans in the upcoming elections in the hope of effecting change.  Democrats have been in power for just over a year.  How quickly these Latins forget the four devastating and corrupt years of Republican leadership.  Do they believe a change will improve minority voting rights, immigration policies, and guarantee citizenship for Dreamers?  Were they enriched by Republican trickle-down economics which ignored the working class and helped the rich get richer?

Frankly, I’m tired of voters who treat the government as if it were a giant pinata.  Congress belongs to them. They must work to improve it, not behave like children of divorced parents, playing one side against the other.

I have little good to say about the Republican Party, though much of my life I was registered as one. When the Supreme Court gave the presidency to George W. Bush instead of returning the case to Florida, as was customary, I lost faith. What I have left to cling to is a  free press. Yes, it is a commercial enterprise.  Yes, it needs advertisers and readers, requirements that encourage headlines that are salacious and misleading. But if the content is honest, it serves democracy.

An informed public is vital if our form of government is to survive.  Even so, the public must remain critical. The difference between truth and political bias isn’t always clear. Of late, some journalists have been having a field day with  Marjorie Taylor Green and her call for “Marhsall” law. Was she seeking the violent overthrow of the government as the headlines imply? Here are her words to Mark Meadows in a phone conversation on 1/17/21: In our private chat with only Members, several are saying the only way to save our Republic is for Trump to call for Marshall law. I don’t know on those things. I just wanted you to tell him. [Donald Trump]

Green feels her words have been mischaracterized.  She may have a point.

The press plays a key role in disseminating information, but the public must perform its due diligence. Not all that’s in print is fit to print. Citizens should gather information from many sources. Otherwise, their biases will make fools of them.  A fair mind is the least we owe our country.