Joy In A Little Dissatisfaction 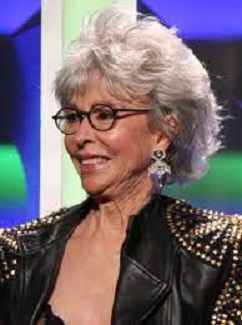 “I still don’t have what I want,” says Rita Moreno, star of stage, screen, and television and also a winner of the Presidential Medal of Freedom, an Oscar, and a Kennedy Center Honor recipient. (“The Queen,” by Erik Maza, Town&Country, March 2022, pg. 84.) I understood what she meant. My mother, also a Latin, spent the majority of her 104 years searching for ways to “renew” herself. Given her economic status, that meant buying a new lipstick or getting a free makeover at a department store counter.  Like Moreno, she never looked back.  Her eyes were always turned to the future. On her lips were the words “Perhaps, Perhaps, Perhaps*

Moreno, 90, who outlived her lovers, including Marlon Brando, dazzles this month with her cover photo on Town&Country.  She’s not trawling for work. Plenty is coming her way. Later this year, she appears in an independent film comedy titled, Pink.  Does all that history make her a legend?  She says “no.” Then she adds, “Perhaps.”

Moreno doesn’t reveal what’s at the center of her heart’s desire. Perhaps the quest is the objective, which is why the actress with so much spirit is my role model. For her, the word retired has no meaning.

Like Moreno, I still don’t have what I want. I call that lack a blessing. Disappointment coupled with hope is the fuel that shapes the future. For example, I continue to strive for a larger audience for my book talk show Just Read It where, occasionally, a best-selling author drops by.  This year marks Just Read It’s 10th season and Phillip Margolin will be with us to celebrate.

If I’m not working on that YouTube program, I’m writing this blog, Write Away.  In May it turns 12.  The world isn’t a dull place so there’s no shortage of topics. That my readers are loyal astounds me, but I hope others will find the site through word-of-mouth or during their meanderings through the internet.

Getting Lost to Find Home will be out next year, published by Rutherford Classics.  After that, I return to short stories. Sales in that venue are immediate.  What’s more, there’s no need to pay an editor or publicist, and I get my money upfront.

Will I be satisfied as I move into the future?  I hope not. Like Moreno, the quest keeps me going.  Having a goal is my wish for all my readers, particularly as they become seniors.  Without a little dissatisfaction, there’s no striving and no way forward.  Save naps for the grave!