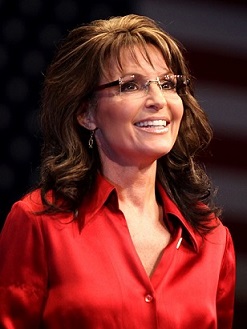 Most societies link human childbirth to the spiritual. “It’s a miracle,” a new parent is likely to gasp upon seeing his or her offspring for the first time.  That sense of the divine is not lost in patriarchal societies. To downplay the woman’s role, religious myths credit the gift of life to male gods.

Having no vagina is not an impediment. The ancient deity Ra gave life through his mouth.  Dionysus sprang from Zeus’s thigh. (Myths and Secrets, by Barbara G. Walker, HarperSanFrancisco, 1983, pg. 106)  In Biblical myth, Eve was the product of Adam’s rib.

Examples of this male-centric propaganda are legion. Sperm does contribute to the ovum’s development, but in real life, when it comes to childbearing, women do the labor.

Aware of this fact, Peter Hamby’s article in Vanity Fair made me chuckle.  In it, he theorized Sarah Palin gave life to Donald Trump. (“How Trump Fades Away,” Vanity Fair, May 2021, pgs. 40-41.)

His reasons are simple. Palin was the first among her fellow Republicans to mix politics with anti-elitism and label the liberal press the “lamestream media.” Though they returned her fire, charging she lacked sophistication, their insult left no wound.  Instead, she seemed to be energized by it.  After all, her message wasn’t for journalists. She was speaking to the common man–soccer moms in particular.

Palin’s genius, Hamby wrote, was to carve out a “new path to power, “one that merged cultural identity with policy. Being a natural performer helped further her cause. She landed light, mocking jabs on the establishment, and it was music to the ears of a constituency hungry for attention.  Their small political contributions swelled from a trickle to an overflow, a phenomenon that caught Steve Bannon’s eye. Eventually, he became her mentor.

In 2012, she decided against a run for the presidency and abandoned center stage.  The footsteps she left behind were too big for most Republicans to fill, but they matched those of Donald Trump. He was an entertainer. He had Palin’s audacity and possessed enough money to be contemptuous of the media. What he lacked was a message and so he seized upon hers, playing to Palin’s audience like Itzhak Perlman with a Stradivarius.

Trump may boast he is a self-made man, but he owed his political success in 2016 to the woman who paved his way.  As a sexist, he’d never he’d concede the point, but Hamby would. The journalist leaves little doubt that Donald Trump is Sarah Palin’s evil seed.