Here’s A Question For You

by Caroline Miller
challenge in writing a memoir, effect of pandemic on book sales, Getting Lost to Find Home, how to create a book audience, self-publish challenges, small press publishing, writing a memoir
6 Comments 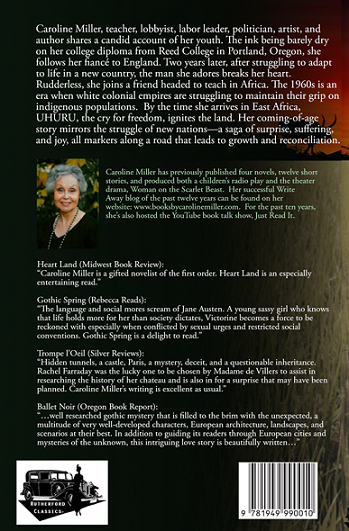 The woman sitting in the coffee shop opposite me had once been my English student.  She’s in her seventies now and I am halfway through my eighties.  From time to time, she assists me with some of my writing projects. Recently, she did a final edit of my memoir which I began in 2018.

Editing a book is tedious so when I joined her at the coffee shop, I was surprised she wanted to talk about the piece.  “Your former students are going to gobble it up,” she reassured me as she sipped her tea. I should have been happy with her assessment.  Instead, my heart sank.  I’d need purchases in greater numbers than a handful of former students could provide.  Two to three hundred sales are the best an unknown author can expect with the support of friends and family. That number isn’t a blip in the book industry.

Translated into dollars, 2-300 sales won’t pay for the cost of a book’s production. Even so, independent authors find that number daunting. To approach it, one has to generate chatter. If no one is talking about a book, even uncle Harry in Peoria won’t buy it. But, how to generate “chatter” is the question.

If someone compliments one of my books, I’m delighted, naturally. But that compliment would go further if it appeared as a recommendation on Amazon or Good Reads, or was shared among friends, rather than whispered to me. The pandemic hasn’t helped authors generate chatter. Book fairs and book clubs are too few and can’t be relied upon as places to generate interest among those who love to read.

In November of 2023, more than a year from now, I plan to publish my memoir, “Getting Lost to Find Home.”  I’m taking the process slowly because it will be the first time I have released a book without a publisher.  Working with small presses has been unrewarding and agents with access to large publishing houses aren’t interested in memoirs from a writer without a large fan base.

Never having had a fan base, I’ve decided to seek the opinions of my blog readers as I move forward.  I start today with the book’s back cover. (Part of the text I’ve repealed below for easy reading.)  Here’s what I’d like to know. If you were browsing in a book store, would the words and design on the back cover catch your eye?

Caroline Miller, teacher, lobbyist, labor leader, politician, artist and author shares a candid account of her youth. The ink being barely dry on her college diploma from Reed College in Portland. Oregon, she follows her fiancé to England. Two years later, after struggling to adapt to a life in a new country, the man she adores breaks her heart. Rudderless, she joins a friend headed to teach in Africa. The 1960s is an era when white colonial empires are struggling to maintain their grip on indigenous populations. By the time she arrives in East Africa, UHURU, the cry for freedom, ignites the land. Her coming-of-age story mirrors the struggle of new nations–a saga of surprise, suffering and joy, all markers along a road the leads to growth and reconciliation.