Fables That Shape Our Democracy 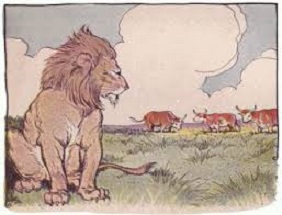 A columnist wrote recently that anti-vaxxers who fall victim to the Covid virus shouldn’t be admitted to hospitals. Facing death, he said, was too late to embrace medical science.  His statement contains an “either/or” proposition. Either a person takes the vaccine or forgoes treatment for the virus. I understand the writer’s frustration but his logic is flawed. Life is too complicated for either/or propositions. Bernie Sanders often utters them. One of his favorites pits working people against the wealthy. “Are we prepared to stand with working families and take on powerful corporate interests?”

The strength of these propositions depends upon the relevance of the pairings. If they are disparate, absurd conclusions follow.  “Either you believe in unicorns or you believe in fabric softener.” These false connections can lead to limited options.  In a Bloomberg essay, a writer argues Democrats should be grateful to Senators Krysten Sinema and Joe Manchin for thwarting the overreach of Democratic progressives. Hidden in his statement is the proposition, “Either you support the status quo or you don’t.”  Life, as we all know, usually overflows the limitation of these alternatives.

Even so, the Republican argument can be more restrictive than “either/or.” The Party strives to eliminate choice. In the 2020 election, members offered no political platform. What’s more, they appear to be avoiding one for the 2022 election.  They favor candidates like Virginia’s newly elected Republican governor. By painting himself neutral during the campaign, he avoided the ire of former QAnon president, Donald Trump, yet attracted the support of moderate voters.

Besides “either/ or” propositions or saying nothing, a third way to influence hearts and minds is to lie. I won’t offer examples.  The media is full of them. Instead, I move to a fourth: changing the subject.  For example, some commentators suggest the resignation of Supreme Court Justice Stephan Bryer is a boon to Democrats. With the media roiling over Bryer’s replacement, the public hears less about the ravages of the pandemic and Biden’s other perceived failures.

The fifth means to influence is one Republicans have also mastered: distraction.  While Washington is in the hands of Democrats, they work in the hinterlands, working  to subvert free and fair elections. Gerrymandering is a favorite device. So is rewriting state voting laws.

These “artistic” devices –“either/or,” omitted facts, lies, and political chicanery– do nothing to preserve our democracy. Without facts and transparency, voters are lured into making poor decisions. Too many in power seem to like it that way.

Fortunately, the public needn’t be a pawn. We could begin by voting less with our gut and more with our reason. It’s human for people to want what they want, but listening to the fairy tales of those eager for our vote is a poor way to choose representatives. A better path might be to elect honest brokers. Liz Cheney and  Adam Kinzinger come to mind.  These two Republicans have risked their careers and crossed party lines to uncover the truth behind the January 6, 2021 insurrection. We owe them our thanks. Similar gratitude should go to those who speak candidly to us on public issues like Dr. Anthony Fauci.  Fighting global warming also requires truthtellers. Controlling it isn’t about new opportunities. To keep the planet safe for human habitation, we will face economic disruption and personal hardship.

Doubtless, the public doesn’t hear these truths because leaders assume we can’t handle them. They tell us fables, instead, and hope to settle issues behind closed doors. Maybe they are right to do so, given the way we’ve performed during the pandemic. It may be that we must hold ourselves accountable for the state of our country as well as our leaders. Too many of us seem to have forgotten that when we put personal freedom above the common good, we place that freedom in jeopardy. Well-being flows from just societies, not the other way around.

If we are to heal our fractured culture, we’d be wise to remember the words John F. Kennedy spoke on January 20, 1961, during his inaugural address. “Ask not what your country can do for you, but what you can do for your country.”

Our nation hasn’t veered too far to the left or the right.  It has veered too far toward individualism that borders on anarchy. Anti-maskers who claim the right to spread a deadly disease rather than suffer the inconvenience of wearing a mask; those who refuse vaccinations yet blame President Biden for the course of the pandemic; heads of big corporations who play both sides of the aisle in pursuit of profits over the good of the nation are examples of the worst that’s in us.

For a refresher course on the cornerstone of democracy, I recommend we stop listening to our selfish interests and reread Aesop’s fable, “The Four Oxen.” It’s s moral tale that ends with an “either/or” but this one rings true. United we stand or divided we fall.