Not Afraid Of Burning In Hell 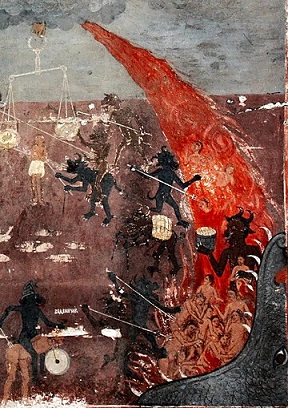 Mubarak Bala, head of the Humanist Society of Nigeria disappeared in late April of this year.  He’d written earlier on Facebook that “the Prophet Muhammad was a terrorist.” Now his friends worry he’s been targeted for retribution.  Blasphemy in that country is punishable by death. (Freethought Today, Oct. 20202, pg. 5.)

A few Nigerians have joined my Facebook page, recently. I wonder if associating with me, an avowed atheist, might pose a danger to them. I hope not. Still, I have little respect for any system– government, or religious– that threatens individuals who exercise free thought.  By definition, that sort of behavior is terrorism.

The will to crush iconoclasts persists in most societies. Yet free-thinkers exist. When Moses came down from the mountain with his Ten Commandments, one or two of his flack must have been skeptical that the words were dictated by God. What proof was there except Moses’s word?

For many, that word was good enough.  But words carry lies and well as truth with equal authority. Today, few of us believe Jonah was swallowed by a whale.

Troublesome as heretics are for believers, they seem to be ahead of the curve on social issues.  They gave up stoning long ago, for example. What’s more, 1200 of them responded to a survey Freedom From Religion Foundation (FFRF) circulated and it was revealing.  As a group, nonbelievers show greater support for women’s rights, reproductive rights, and LGBTQ rights than the general population. They also approve reasonable gun control laws, a free public college education for students, voting by mail, and a minimum income. (Ibid, pg. 3).  For them, doing unto others isn’t motivated by religion but by basic decency.

Nature seems to look kindly upon nonbelievers, surprisingly. Results from a Baylor Religion survey involving 1501 participants found “73% of atheists and agnostics usually got the recommended sleep quotient. By contrast only 65% of people who considered themselves religious got the same. The figure was 54% for Baptist.” (Ibid, pg. 5.)