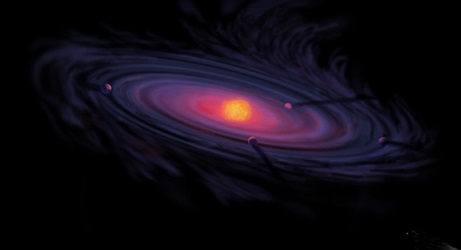 Here’s the overwhelming question.  How can a combination of amino acids write a symphony or join the Republican party or commit stock fraud or feel patriotism for a section of the earth which is, itself, no more than a combination of amino acids?  (“Science reveals the code of the universe,” By James A. Haught, reprinted in Freethought Today, March 2021, pgs. 12-13.)

Religion, philosophy, art, and science covet the answer to this question which is most often expressed as, “Who am I?  And, “Why are we here?”  Rather than investigate, religion imposes answers framed as a belief system; philosophy applies reason; art intuits, and science unearths facts.

Searching for facts sounds sensible but facts can change.  Aristotle saw the world as composed of four elements: earth, fire, water, air, and a heavenly fifth, ether.  Isaac Newton chose to see the universe as governed by mechanical forces, and  Albert Einstein tinkered with the idea,  adding his theory of relativity.  Meanwhile, Max Planck played with his notion of quantum mechanics and a set of rules that gave order to  the subatomic world. According to him, laws in the invisible world differed from those in the visible one.

How could Planck be right? Why would the behavior of small matter differ from that of large matter? Everything comes from stardust, doesn’t it?

As math doesn’t lie, scientists wondered if the worlds, mechanical and quantum, could be aligned. Surely, the difference had to be more than cosmic error. Like Einstein, most of us suppose, “God doesn’t play dice with the universe”– God being a metaphor for laws governing space rather than a deity.   In any case, who doesn’t want to see Humpy Dumpty put back together again?

The religious among us might consider the question moot.  “God works in works in mysterious ways,” they’d shrug.  Others, goaded by curiosity, might want to peek behind the wizard’s curtain.  Maybe the universe is a giant puzzle created to entertain humans beings? If so, turning our backs on the mystery seems blasphemous.

If nature abhors a vacuum, scientists do too. Like Lilliputians, they pit their small brains against the infinite determined to tease out its mysteries. They know water can assume different states with different properties—solid, liquid, gas. Can the universe do the same?

For many, the quest for the answer begins with the search for a heavy particle, one which may offer a clue to dark matter. Dark matter is invisible “stuff” without which the universe would cease to exist. Some researchers believe the particle associated with it could be a doorway to a fifth dimension, a point through which dark matter enters and leaves our universe. But to find it, those researchers may need to change the way they think about energy.

Current thought about energy is that it takes two forms. It’s either a wave or a particle.  But what if the assumption is wrong? Two theorists, Larry Silverberg and Jeffrey Eischen believe that it is.  They think energy exists as fragments coursing through the universe. To perceive it as a particle or a wave may be the result of positioning.

The fragment of energy is a lot like stars in a distant galaxy. From afar, a galaxy looks like a bright glow of light radiating outward.  But on closer inspection, astronomers can resolve individual stars making up the galaxy.  In the same sense, the fragment of energy represents a concentration of energy that flows and dissipates outward away from the center. (Ibid, pg. 2)

Where fragments pool and become heavy, that may be the point where portals that allow dark matter to enter or escape our universe into a firth dimension are born.

At the moment, finding a heavy particle is beyond the reach of existing supercolliders. But refinements are in the works which may prove Silverberg’s and Eischen’s theory. If so, we might discover the universe doesn’t have to be put back together because we’ll see the bigger picture.

Will finding the heavy particle satisfy human curiosity?  Probably not. When scientists unlock one door, they usually find another. God works in mysterious ways.