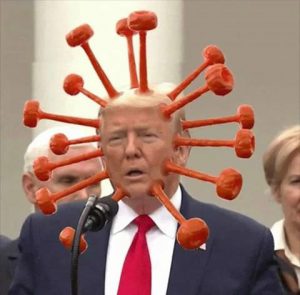 The current Covid-19 pandemic has given rise to numerous conspiracy theories concerning why it happened. Though we know little about the virus as yet, these theories have flourished like toadstools after a sodden rain. Thanks to the internet, they have spread to remote places like Gymyakon, Siberia, and Motuo, Tibet.  Surprisingly, a single agency within the beltway of Washington D. C. is charged with defeating this proliferation: the Global Engagement Center (GEC).

Created near the end of Barrack Obama’s administration, it consists of 120 investigators whose job it is to quash harmful misinformation. That isn’t a robust number for a mandate intended to create an “effective shield against the falsehoods that threaten the integrity of our  democracy and other democracies“ (“The U. S. Department of Conspiracy Theory Preparedness,” by Joshua Brustein, May 18, 2020, Bloomberg Businessweek, May 18, 2020, pg. 51.)

For a time, Donald Trump, Obama’s successor, ignored the GEC. Only recently did he appoint a director, Lea Gabrielle, a former reporter for Fox News.  Once Installed in office, her first order of business was to request an increase in her budget. That was good news to her staff. They saw it as a sign she had an inkling about the enormity of the task despite her thin resume.  Bear in mind that Facebook has  44,947 full-time employees standing by to root out conspiracy theories on their platform, yet Congress accuses them of having failed miserably.

Gabrielle and her band of 120 face an even greater obstacle than Facebook. Their boss.  Trump is a man credited with having fomented numerous conspiracy theories himself, from his birther accusation to his newly whispered scandal, Obamagate.  He churns them out almost daily.  In fact, he’s been so inventive with the Covid-19 virus, its origin and cures, that Dr. Anthony Fauci, a medical expert on infectious diseases, seemed to curl into himself like a sow bug when he heard one theory recently.

Graham Brooks, who runs the Atlantic Council, a Washington think tank, and who was a member of the National Security Council in the Obama years, describes Gabrielle’s challenge as director of the GEC succinctly. “Trump’s lack of credibility on misinformation is a major impediment.” (Ibid, pg. 53.)

Most of us know the internet is alive with sites ready to affirm the implausible. Wikispooks is one. It copies Wikipedia’s format but is no more dedicated to truth than a chameleon is to a single color. Nonetheless, for the raw insanity of watching a President spin out conspiracy theories as he desperately strives to win reelection in 2020, a person can do no better than to watch his press conferences or follow his tweets.

As for Gabrielle and her mission, I agonize for her. She is another example of a woman left to stand at the edge of a glass cliff.