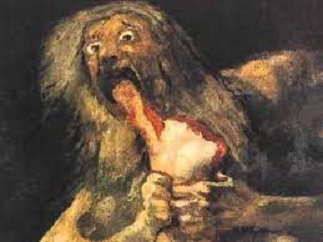 Satan Devouring His Son by Goya courtesy of wikipedia.org,

“We are a storytelling species, every bit as much as a tool-using one,” writes the author of The English Professor Who Foresaw Modern Neuroscience.   I agree. As a teacher, I would tell my students, “If you want to see how your mind works, write something.”  Composition exposes not only bias but logical gaps that remain unobservable as private thoughts.

Today, neuroscience tells us why we are storytellers. A link exists between memory and imagination. “…remembering past events and imagining future ones share similar cognitive network space within the brain.” (Ibid, pg. 40.)   Both functions store information, not as a snapshot but in narrative clusters that may involve letters or images, or emotions.  (Ibid, pg. 39.)  Writing stories about ourselves to understand ourselves seems to be natural.

During a discussion of Susanna Clarke’s novel Piranesi on “Just Read It,”  I locked horns with a guest about the book’s eponymous central character. I thought he was a tragic figure.  The guest called Piranesi “resilient.” I agreed then pointed to the central figure of Sophocles’ play, Oedipus Rex. Here was a resilient man whose life was tragic.  Likewise, Piranesi endures, yet he is strung between two worlds, neither of which completes him. The conflict deprives him of a coherent view of himself and leaves readers to question his sanity.

Donald Trump, our 45th president is a man conflicted by many incoherent views about his world, leading some to question his mental health. Can a person untroubled by contradiction be stable?  Because Trump is no longer president, the question would be academic, except that he has legitimized an affliction that is more common than once thought.

Calling themselves “patriots,” some among us feel entitled to assault their capital, attempt to assassinate elected leaders, and are so inured to violence as a form of resolution, they attack health care professionals during a pandemic and teachers who struggle to keep children safe. That they choose to take dangerous and unproven remedies rather than a vaccine that is effective shows the depth of their dysfunction.

Members of Congress aren’t exempt.  Mitch McConnell, Senate Minority leader, comes to mind.  In recent years, he’s reversed his position on the filibuster; Supreme Court Judge appointments, and Trump’s impeachment, declaring on that occasion the president was unfit for office yet refusing to impeach him. Most recently, we have his argument against voting to lift the debt ceiling, an action he has supported in the past.

Eric Hoffer had something to say about the nature of this disorder:

The fiercest fanatics are often selfish people who were forced, by innate shortcomings or external circumstances, to lose faith in their own selves. They separate the excellent instrument of their selfishness from their ineffectual selves and attach it to the service of some holy cause.

Is it possible that selfishness lies at the center of the current cynicism?  As a nation, we’ve suffered little compared to others. Has this privilege given rise to egregious self-interest? Are there among us people so convinced of their superiority that they would prefer to bring down democracy rather than share wealth and power?

If so, their decision over time will betray them. The past is not a prologue to the future. Climate change and the earth’s dwindling resources are fomenting swells of population migration.  Border walls and voter suppression will not stem that tide. The country needs a new vision. First, we must recognize the tools of capitalism and competition, alone, no longer serve. Second, let us diagnose the problem correctly. Those who choose to fight rather than share are neither rational nor patriots.

Nihilism is the destructive impulse of the insane. Hopefully, a majority of us understand that patriotism is about more than the right to pursue personal happiness and freedom.  Patriotism includes obligation. “… ask not what your country can do for you—ask what you can do for your country.”