Casting A Wider Net On Being Human 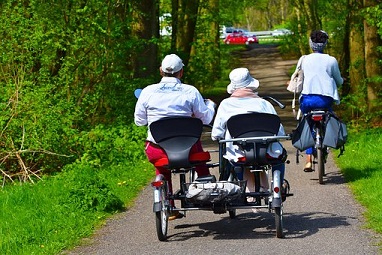 At the retirement center where I live, I recently sat down beside a woman who suffers from tremors. She was enjoying a late lunch by herself which made me wonder if she might find my presence a distraction. Her smile reassured me.

As I settled in, I recalled the first time we’d met, four years earlier. New to the establishment,  I’d followed a waitress to a table where two women were partway through their dinner. Sitting down, I noticed one of them was clutching a spoon with an overly large bowl. She followed my gaze and became apologetic. The spoon was her son’s idea, she explained.  He hoped it would allow her to scoop food from her plate with greater ease. Perhaps it did, though I’ve never seen my friend use it since.

The afternoon I joined her, she was enjoying a sandwich. No implements were necessary. But it wouldn’t have mattered.  By now we’d grown comfortable with each other.

“How are your poems going?” I pressed. I’m an admirer of her work.  A strong poet, she’s capable of airy images that surprise and pack a punch.

“A work still in progress” she sighed.

We’d not gone much beyond the sigh when a man whom I little knew joined us. Someone had mentioned he’d been an attorney in his professional life, but that Parkinson’s had ended his career. He pulled a chair from our table with one hand and in the other, he was holding an oatmeal and raisin cookie.  One corner of the wrapping he’d pulled free to nibble on a few crumbs.

I judged him to be in his sixties, yet my overall impression was of a boy. Time had little touched his features and his gray hair jutted from his scalp as if he’d spent the afternoon rolling in autumn leaves. As he sat down, he brushed his hair from his face, the way someone might do if he expected to find foliage hidden among the follicles.

Imagining him as a fourth-grader in my mind’s eye was easy. I could see him hunkered at the back of the classroom, tilting on two legs of his chair until his shoulders anchored him to the wall. Boys of his ilk usually kept a frog hidden in their desks. I’m certain he had one, green, with a deep croak.

Sunlight tumbled through a nearby window as the three of us began to talk. I suppose the unseasonable warmth brought out the child in me. “What about that cookie?” I eyed the man beside me as if I were a prosecutor. “Are you going to eat it or torture it until it’s nothing but crumbs?”

The attorney laughed, then threw back his head as he tossed a few morsels into his mouth. Such play between us was possible because, in a setting where everyone is vulnerable, trust is a requisite.

Recently, I read that because people are living longer, ours is the first era in human history where several generations exist side by side. (Staying in The Mix,” by Chris Farrell, Bloomberg Businessweek, 23, 2019, pg 39) The author of the article, Chris Farrell thought this rubbing of shoulders was a gift. “When you have people in their 70s sitting next to kids in their 20s in classrooms and workplace cubicles, you get more creativity and productivity, and less age stereotyping.” (Ibid, pg. 39)

I agree. A mix, which includes age, together with its infirmities, opens our eyes and gives us a greater understanding of what it is to be human.