Kazuo Ishiguro’s, The Buried Giant (Random House, 2015) is a tale signifying something, but the critics aren’t sure what.   Jon Ronson of the New York Times (Click) calls it a fantasy or a story akin to allegory.  Tim Holland of The Guardian attempts to cover all the basis, linking the work to past literary traditions like Sir Gawain and the Green Knight and Beowulf all the way down to its off-spring, Tolkien’s Lord of the Rings.  His final conclusion is that the book is strange and weird. (Click)

Holland is right, of course.  Ishiguro has borrowed from much of the literary past, reaching into the Arthurian world where dragons and pixies exist; yet it is a world entirely his own.   Beyond one or two Arthurian characters and its standards of courage and chivalry, Ishiguro’s terrain is strange to us, filling the reader with a sense of unease.  Part of the disquiet has a physical cause.  Fog obscures the novel’s landscape and robs the inhabitants of permanent memories.

Axl and Beatrice, an elderly couple, are the central characters of the story.  They have little inkling of their past, but they hold on to a memory of a son who may or not be dead.  Neither is sure.  They, like everyone else, are victims of the fog — a dragon’s breath which King Arthur has created to prevent old enemies, the Brits, and the Saxons, from killing each other in the land they share.  But as the dragon ages, its powers weaken.  Axl and Beatrice become convinced that between them, they share enough memories to find their son.  They set out on a quest to learn why the lad disappeared from their village.  During their journey, they uncover old memories — the buried giant of a sad and terrible past.  One of their recovered recollections is about their son.  He is dead and he ran away because his mother betrayed his father with another man.  They remember, too, the ancient tribal hatreds of earlier days.  With truth uncovered, how is this ancient couple, so seemingly devoted to one another, to go on? Either they must part or chose to forget the past once more.

Beatrice chooses to forget.  At the novel’s close, she is ferried to the island where her son lies buried and where memory fades.  Axl pleads to join her, but she refuses.  Her boat is too small, she says and begs him to take another.  He knows hers is an excuse, so he turns his back on her.  As his wife fades into the mist, Axl’s eyes are focused on the way they have come, back to the land where old hatreds will soon arise and be washed in new violence and new blood.  Axl chooses to remember.

The role of memory is at the core of this novel, both on the personal and the historical level.  Whatever is remembered or re-remembered colors the landscape and alters reality. Only the naïve see history as honest.  Instead, it is a tale spun by winners and fraught with cultural amnesia.  Yet when the giant stirs, grief is sure to follow.  Think of Bosnia, Ireland, the current turmoil in the Middle East– a few of the myriad of examples where hatred arises when history fails to rewrite itself effectively.

When I closed the last chapter of Ishiguro’s book, I had to wonder if this Japanese writer wasn’t moved by the ironies of his personal history.  He is a man who lives with the aftermath of the bombings of Hiroshima and Nagasaki.  That memory must taint his view of history and his country’s reconciliation with an enemy that has become its strongest ally.

Ishiguro’s novel examines the choice life has given us: to forget old wrongs or to remember.  The Buried Giant is a simple tale told with simple elegance, yet one that raises a question of great complexity — not the metaphysical one of why we live, but the pragmatic one of how we should live. 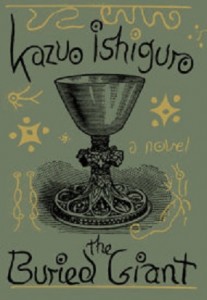