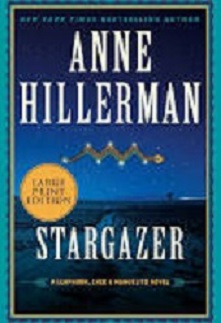 I mentioned on Facebook recently that I’d been privileged to interview best-selling author, Anne Hillerman.  The daughter of Tony Hillerman, she picked up writing his popular Southwest Indian mysteries that featured detectives Joe Leaphorn and Jim Chee.  This April, Anne Hillerman launched her 6th book, Stargazer.  During the interview, we talked about what’s new in the Navajo nation and why she decided to keep her father’s saga alive.  Our conversation airs May 1 on Just Read It, my YouTube book review program which features Pacific Northwest writers who critique New York Times bestsellers.

Anne Hilleman’s books are faithful to her dad’s original concept of his sleuths. What’s changed is an expanded role for investigator Bernadette Manuelito. A minor figure in the initial series, Anne Hillerman has married Manuelito to Chee and allowed the character to exhibit mystery-solving skills comparable to the male protagonist’s.  That shift, though slight, was a risk as it could have alienated longtime loyal fans. By way of example, one of my Facebook friends admitted she’d dropped the stories after Tony Hilleman’s death. Others probably did the same. Those who stayed are cheering.

I won’t describe the plot as that’s the stuff of book jackets.  My job is to convince loyalists of the old series to give this new iteration a try.  Current fans welcome Manuelito’s presence because she brings depth to Tony Hilleman’s hardboiled formula.  As a career woman, wife, daughter to an aging mother, and mentor to an unpredictable sister, the young officer must reevaluate her priorities day by day and from moment to moment.

She isn’t alone in her dilemma. As tensions mount, each member of the detective trio must confront personal feelings about the work and consider the obligations each owes to loved ones.

Stargazer won’t disappoint and it’s likely to keep a reader turning pages well into the night. How could it be otherwise when all three investigators are on the scene, grappling with puzzles that resist solutions?  Or, if solved, they open to new questions?

If you love a puzzle, Anne Hilleman’s books invite you to consider the many in your own.  Unlike the Navajo detectives, we may not rise at dawn to thank the sun for our existence, but we do wonder about the mystery. With Leaphorn, Chee, and Manuelito as our guides, we dare to contemplate.