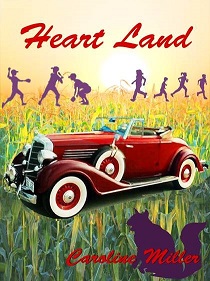 Heart Land is a fictional memoir of a bright and reckless boy growing up in rural Ohio in 1939, at the close of the Depression and before America’s entrance into World War II.  Ockley Green is a sleepy farming community where a kid with an active imagination is as likely to trick his younger brother into thinking monsters hide under the bed as he is to learn from the men who gather at the local diner to talk crops and politics.  In this safe world, Oliver Larson makes mistakes and learns about taking responsibility – important lessons in the making of a man.  Instruction begins when Bodacious Scurvy, the town’s notorious alley cat, crosses Oliver’s path and gives him an idea. (Click)

Readers of James Herriot’s, All Creatures Great and Small, should enjoy this quirky novel with its series of adventures that can bring a smile to the lips or a lump to the throat.  In one scene, Craig, a boy whose mother has recently died, takes responsibility for her kitchen.  He reaches up for her favorite cook book and,

Fannie Farmer fell into his hands.  The name, Fannie, had always made Craig smirk, but this time there was something magical about the way the pages fell open to the section on breads.  The words, ‘A simple recipe for soda biscuits’ flew up at him.  The boy peered around the room, half expecting to see his mother smiling; but he was alone.  Still, he took the incident as a sign and placed himself in the hands of Fannie Farmer, a woman he did not know and whom he imagined had a beaked nose and wore thick glasses.  (Heart Land, pg. 55)

For lovers, Uncle Henry’s words to Oliver about Nancy Gunderson might be a comfort.  Nancy’s a new girl at school who won’t give Oliver the time of day, and that makes him contemplate joining the Foreign Legion.

‘You know, Oliver,’ he said, drawing his arms around my shoulders, “There’s plenty of times when running away looks like a good idea.  That’s how the Foreign Legion got started.  But I’ve learned that no man goes far in life without the opportunity to make a fool of himself.  As long as men and women are around, the Legion will exist.’ (Ibid. pg 23)

There’s the arrival of the charming hobo who changes many lives; a dash through a cornfield in a red, runaway 1934 Oldsmobile roadster; an ant and a Martian invasion, not to mention a battle with giant bats — adventures that keep the community of Ockley Green more than a little quirky.

Thanks to my new publisher, who has reprinted the novel after the former one folded. I’m delighted to announce that Heart Land lives and this time with illustrations.   Only those averse to laughter will be disappointed.