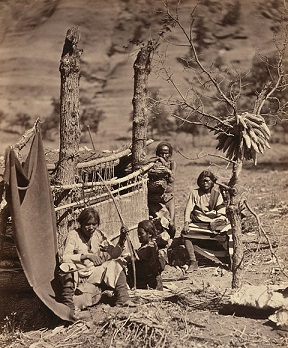 At twilight, when the sky was a faint wash of blue, my mother sometimes caught me sneaking out of our apartment for one last game of hide-and-seek with neighborhood pals.  “It’s not safe, after dark,” she’d scold, shaking her finger at me.

“But mama, plenty of kids are around,” I’d object.

Each time she heard me, she’d snort.  “You think playmates will save you from a kidnapper? They’ll run home to their mommas.  Don’t think people will help.”

She spoke from experience.  As a child, her momma had dragged her across Central America to avoid the ripening revolutions in the territory. Sometimes their poverty forced the older woman into prostitution. The nights she entertained clients, she’d dump her child onto the street as if she were a cat, warning her to hide in the shadows until she heard her name called.  Barely old enough to attend school, if there’d been a school, that youngster crouched in the darkness, terrified, and prayed to for the sound of her mother’s voice.

My parent had lived in the hardpan of existence, so I understood why she took a dim view of her fellow human beings. Some of that disappointment may have rubbed off on me because I wasn’t surprised when I read a woman had been raped on a commuter train while her fellow passengers did nothing.  Similar events had happened before and would again.

The miasma to which I refer has a name: the Bystander Effect.  In a crisis, people in a crowd will shift the responsibility to act upon others. When only one or two people are present, shirking that responsibility is harder. Someone usually responds.

Rape is a violent act, so it’s hard to accept that people who are witnesses will do nothing.  But other forms of abuse are likely to be tolerated, too.  Some pass as jokes. Al Franken’s photographic attack on a sleeping woman is an example. Verbal assaults that question a woman’s competence are also common.  Russia’s dictator, Vladimir Putin makes a habit of belittling females. At a conference, he mocked one journalist for being too beautiful to make sense. On other occasions, he’s accused Undersecretary of State  Victoria Nuland and  Fiona Hill, former foreign affairs specialists with the U. S. National Security Council, of being “hysterical.”

Misogynists are men who fear women. They insist they are superior without the benefit of supporting research. Reliable studies show that in …intellect, analytical powers, social skills, or personal motivation no major distinction exists between the sexes. (pg. 7) Significant differences fall to size and temperament.  Men tend to be larger and more aggressive than women.

Scientists had wondered if those two differences could explain why patriarchy developed. Most, however, have concluded size and aggression are not major contributors.  However, these attributes could explain why males dominate some occupations– construction work, the military, or acting as bodyguards, for example. Leadership requires neither of these.  A boy king may command an army, for example. In addition, patriarchy developed after many societies formed. Earlier foraging groups were “largely egalitarian and communal.”(pg. 23).

No comprehensive theory exists to explain why patriarchy became widespread. (pg. 14)  But once it took hold, it persisted. One researcher suggested it survives because …humans are remarkably easy to indoctrinate…they would rather believe than know. (pg. 4)

Recently, some have speculated that growth in trade and portable wealth knocked women from their perch. When they were able to produce more goods than the tribe consumed, the surplus was traded for merchandise from other tribes. Blankets, pots, jewelry, became portable wealth. Somehow, men inserted themselves into the process, becoming the buyers and sellers of those goods.  Eventually, women, like cattle, were valued as a commodity themselves.   (pg. 26)

With portable wealth, inheritance was possible. That meant families needed to protect their lineage.  Women were obliged to be pure.  As such, they lost their freedom.  Once married, for example, a bride might be required to move into the home of her husband’s family. There, she could be kept under supervision.

Unfortunately, a blog, like this one, is unable to encapsulate the mountains of research on the topic of patriarchy. My brief recording of a recent theory absolves no one interested in the subject from doing their due diligence. Nonetheless, I feel I would fail in my summary if I didn’t offer one observation.  Women in patriarchies are valued in inverse proportion to their contributions to those societies.* The question is why.

Historically, women brought children and wealth to their tribes. These facts may have dug deep into the male psyche.  Certainly, they created myths to suggest women were inferior.  Adam and Eve is an example. This story runs through many religions, Christian and non-Christian.

I’m no scholar,  so I make my observation without citing evidence. My thoughts bend to the greater question. Why have women acceded to the myths? Why have they bent their necks to the yoke of masculine aggression for so long?  Perhaps the truth lies in the quote I mentioned earlier.  People prefer to be told what to think rather than to know.

*A systematic look at a condition in no way denies the many exceptions.  I have enjoyed the help, friendship, and love of men who, had they been absent in my life, would have left it a void.  I hope they will forgive this blog.